From Downtown: Take the West Shoreway, OH-2, to the Edgewater Park/Edgewater Yacht Club exit. Follow the Whiskey Island Marina signs on the road that curves east and south of the Westerly Waste Water Treatment Plant. At the stop sign, continue straight ahead on the paved road to the marina.
From Ohio Ornithological Society

Wendy Park is a stop on the Lake Erie Birding Trail.

Wendy Park, Whiskey Island is one of the best places in the state to look for gulls! The beach provides an excellent view of the channel between the shore and the break wall. The nearby Coast Guard Station allows you to get even further out into the fray. When the ships come through, it can cause quite the frenzy with the gulls.

Take note, in the winter it’s cold but worth it. You may even have a chance for Purple Sandpiper along the break wall. Scope highly recommended.
From Ohio Ornithological Society

The 25.4-acre Wendy Park is located on Whiskey Island at the eastern end of Ed Hauser Way in Cleveland. Whiskey Island is actually a peninsula. It is bounded by Lake Erie, the Cuyahoga River, and the Cuyahoga River’s old channel to the north, east, and south, respectively. In order to straighten the shipping channel, the river mouth was relocated to the east in 1827, which created an island. However, in the 1920s, the old river mouth was filled in and the island was no more. Whiskey Island received its name after a distillery that was built on-site in the 1930s. Wendy Park opened in 2005 and features sand volleyball courts, a picnic area, trails, fishing access, and kayak access. The park offers access to both the lake and river. A 1,440-foot paved pier at the river mouth connects to the historic U.S. Coast Guard station.
From Lake Erie Public Access Guide

Wendy Park only covers 25 acres, and much of it is mowed grass lawn. But there are plenty of thickets and stands of cottonwood trees, which can be bursting at the seams with songbirds during peak migratory periods.
From Wendy Park (Whiskey Island) website

The 25.4-acre Wendy Park, at the eastern terminus Ed Hauser Way (formerly Whiskey Island Drive), provides access to both Lake Erie and the Cuyahoga River. The park’s access road is reached via the Edgewater Park freeway ramp off Cleveland Memorial Shoreway (US-6, US-20, and OH-2).

Traveling the length of Ed Hauser Way provides a glimpse of Cleveland’s industrial heritage as it parallels networks of railroad tracks and passes piles of iron pellets and salt, a marina, and a water treatment plant.

Whiskey Island was named after a distillery that was built on the land in the 1830s. The “island” is actually now a peninsula, but when the Cuyahoga River mouth was relocated to its current location in 1827 to straighten the shipping channel, the land was surrounded by water. The old river mouth was filled in the 1920s, and the “island” was no more. In 2004, Cuyahoga County purchased the land that includes the park and Whiskey Island Marina.

The county’s purchase of Wendy Park was spurred by the Friends of Whiskey Island, led by the late, citizen-activist Ed Hauser for whom the access road was dedicated in 2009. The park features sand volleyball courts, a picnic area, trails, and fishing access. The park’s Cuyahoga River access includes a 1,440-foot paved pier connecting to the historic Coast Guard station. Wendy Park also affords scenic views of downtown Cleveland. 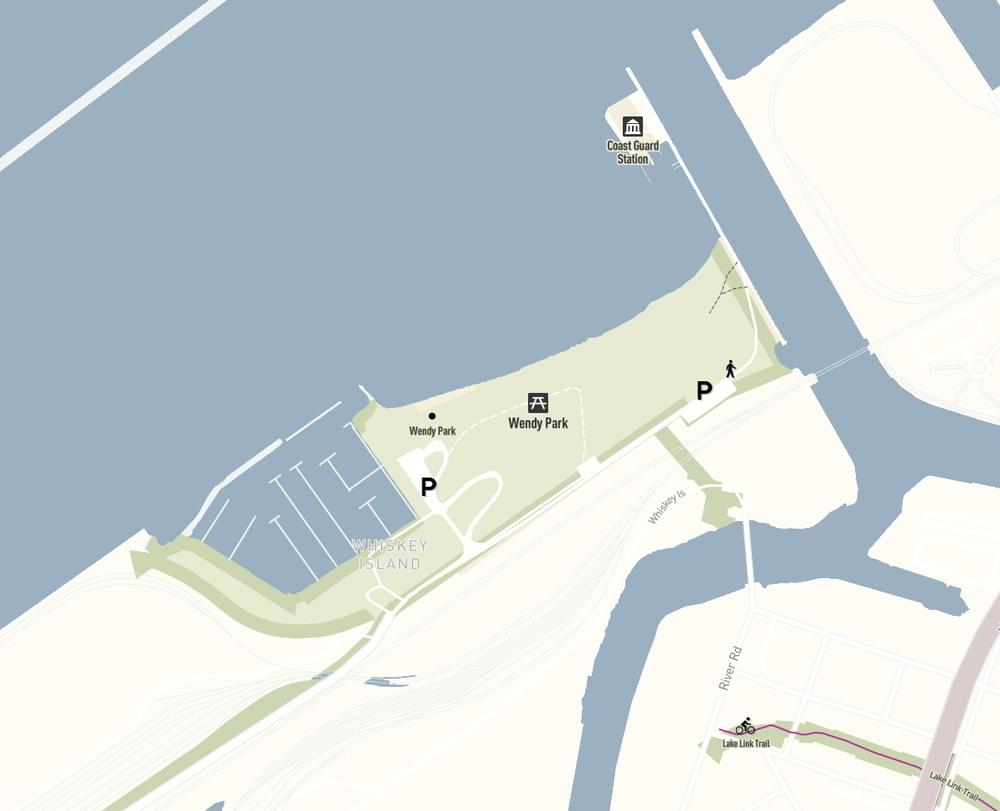