As an open meadow park positioned along the Mahoning River, Thomas A. Swift MetroPark offers tremendous education and conservation opportunities. The undeveloped 12.5-acre park located in Braceville Township consists of relatively flat grassland and is bordered by the Mahoning River to the east and the lightly-traveled Benedict-Leavittsburg Road to the West. Trees enshroud the low-lying and sometimes muddy riverbanks, an area that has also been designated as a floodplain. As a property obtained with Clean Ohio funding, only ecologically sensitive improvements to permit public access and passive recreation can be made. Additionally, the park contains a gated gas pipeline facility, which is located along the roadway near the center of the property.

Surrounding land uses include rural residential, agriculture, and light commercial, with much of the surrounding land remaining undeveloped woodland and fields. A Christmas tree farm exists directly south of the property. A 2000 Eastgate traffic study determined that an average of 93 cars traverse Benedict-Leavittsburg Road daily; however, access to Thomas A. Swift MetroPark from the heavily traveled State Route 5 is very fast and simple. Additionally, located about a mile away along State Route 82 is the popular Braceville Athletic Club, an area offering an assortment of active recreation activities, including several baseball fields.

MetroParks acquired the 12-acre Braceville property in 2003 through a donation by the Trumbull County Commissioners, who had purchased the property through the Planning Commission utilizing Clean Ohio Funds. The land was targeted by the Planning Commission out of concern for preserving the sensitive wetland and riverbank environment along the Mahoning River. While those lands surrounding the park are undeveloped, they are not necessarily protected, and the pressure for residential development within Braceville may rise during times of economic prosperity. Park Commissioners named the park in honor of the sitting Trumbull County Probate Court judge, Thomas A. Swift. MetroParks began promoting the park shortly thereafter in its brochures, website, and even a grand opening ceremony in the summer of 2006. In 2011 a large parking lot was constructed in a grass field located near Benedict Leavittsburg Road along with a smaller lot near the river to provide canoe and kayak access to visitors. In 2012 a ADA-accessible mulch trail was built and named in honor of Honorable Judge Swift’s son Ethan.

Braceville and western Warren Townships are sparsely populated, yet located around heavily traveled highways. The serene meadow at Thomas A. Swift Park features an abundance of wildlife, as do the surrounding fields and forest lands, presenting plenty of opportunity for nature lovers. The existing gas pipeline substation is gated with warning signage already in place. A newly paved canoe/kayak ramp was installed in 2014 to provide better access to the river. 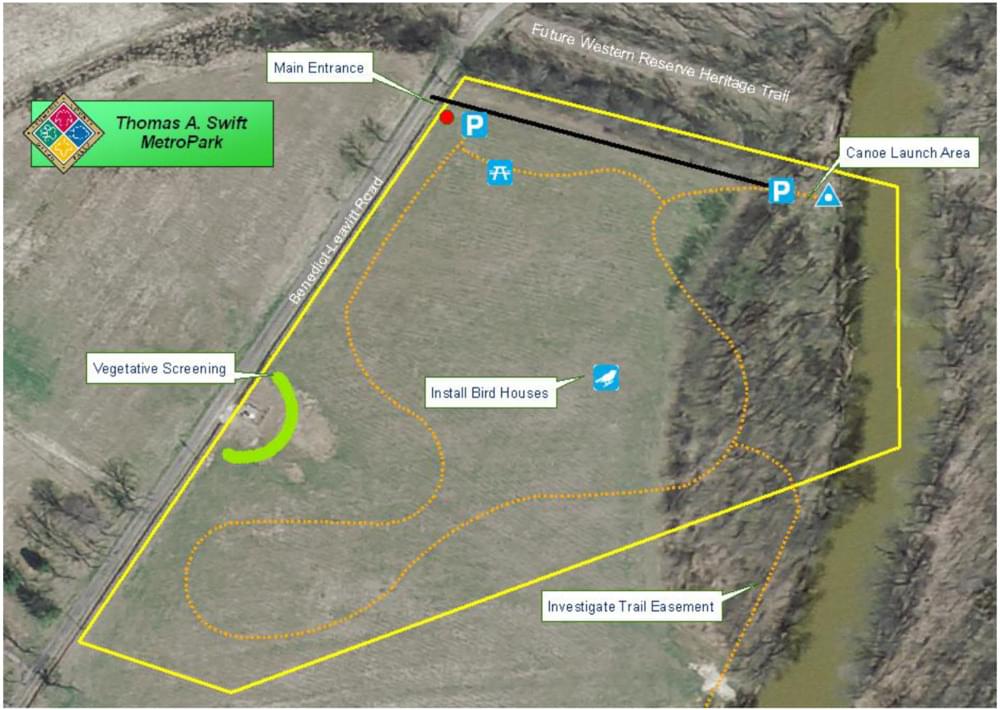