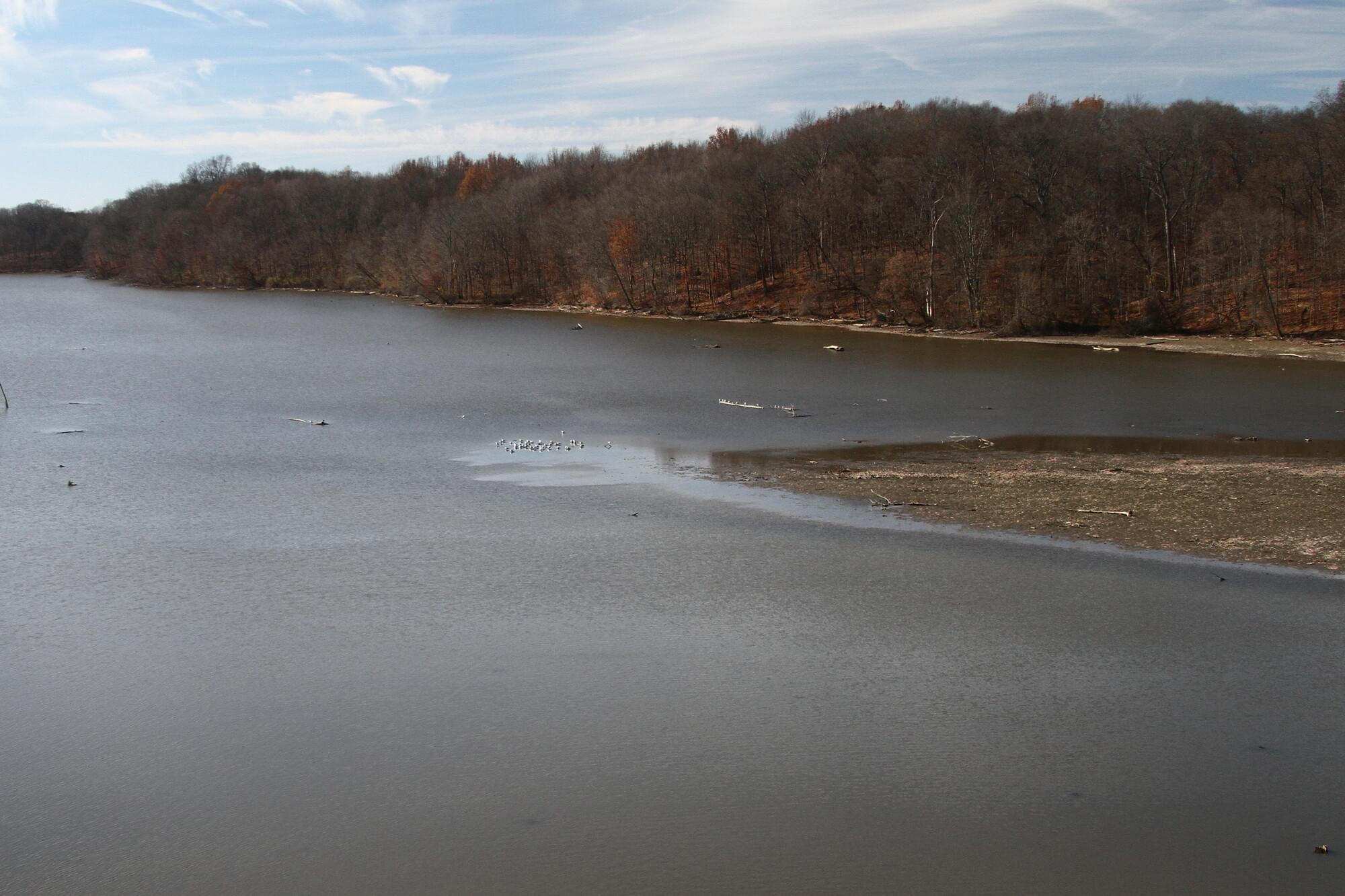 Also, see all the hotspots at:
Alum Creek State Park

This neat location at the north end of the park may provide habitat for the greatest bird diversity in all of central Ohio. To get here, take Hogback Road north from Howard Road (east of the bridge) for about .5 mile through farm fields. You will soon reach the Hogback Preserve, run by Delaware County’s Preservation Parks. This preserve has a nature center and a small trail through an old oak-hickory forest on the crest of a ravine. Listen for vireos (Yellow-throated, Warbling, and Red-eyed), tanagers (both summer and scarlet) and warblers, and talk with the naturalist-rangers about what has been in the area recently. North of the preserve, the road zigzags and runs past a large parking area. You can park here and walk the Winterhawk trail in either direction. To the south, it loops through a wooded ravine and then along the crest of a cliff, 20-30 feet above the reservoir. The forest is not as mature here as in other locations, but still holds many forest birds. The reservoir is narrow here and can have flocks of waterfowl in the fall and spring months. If the water level here is very low in the fall, it can even have shorebirds. Further north, Hogback Road opens onto a narrow ridge overlooking the reservoir before dropping down to run along the reservoir shore. You can park at several dirt pull-offs here along the road. This is the northern end of the reservoir and its’ narrow valley here forms a basin hemmed in by low, wooded hills. The water is very shallow here, so the area is great for herons, dabbling ducks, and shorebirds in the late summer and autumn. Osprey nest platforms here have supported at least one active nest (since the late 1990s), and Ospreys can usually be found in the area from April through September. The flow of wind through the basin is also good for birds in flight and you can usually find cruising swallows and soaring hawks and vultures here. A walk around the small marsh at the northern end can be good for sparrows and wrens if the water is not too high. Be aware that this area is popular with waterfowl hunters from late October through December. Hogback Road doesn’t stop at the basin, but continues north through woodlands along the east slope of the Alum Creek valley up to OH-521 at the hamlet of Kilbourne. Within .25 mile of the basin, the road crosses three small, wooded ravines that hold many of the forest birds scarce in the southern portion of the park, including Yellow-billed Cuckoo, Acadian and Great-crested Flycatchers, Vireos, Scarlet Tanagers, Cerulean, Hooded, and Kentucky Warblers.

Alum Creek rests in the midst of the fertile agricultural till plains and river valleys of Delaware County. In contrast to the surrounding farmlands, the park offers a diverse array of natural features. Cliffs of Ohio shale are notable in many areas, exposed as Alum Creek and other streams cut through underlying bedrock. The shale was formed as mud washed into the ancient sea which covered the area several hundred million years ago. The dark hue of the rock is due to the mixture of a carbonized plant material and mud that formed the shale.

The rich soils of Delaware County gave rise to a luxuriant beech-maple forest after the retreat of the glaciers about 12,000 years ago. That original forest has long since been cut but a healthy second-growth forest is preserved in the park. The woodlands harbor a variety of plant species and offer the interested observer beautiful displays of wildflowers and wildlife. Large-flowered trillium, wild geranium, bloodroot, and spring beauties carpet the forest floor. The forest is home to fox squirrel, woodchuck, rabbit, white-tail deer, and many other species of wildlife. 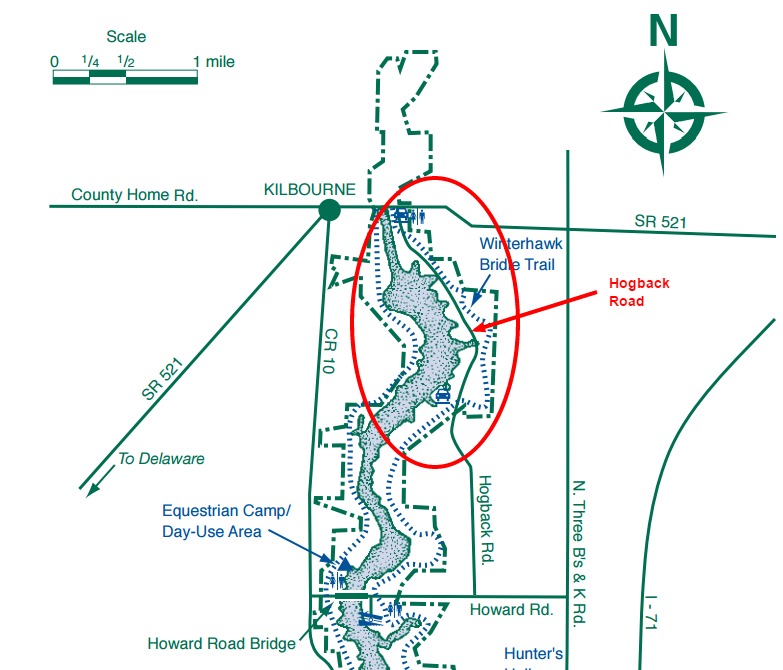 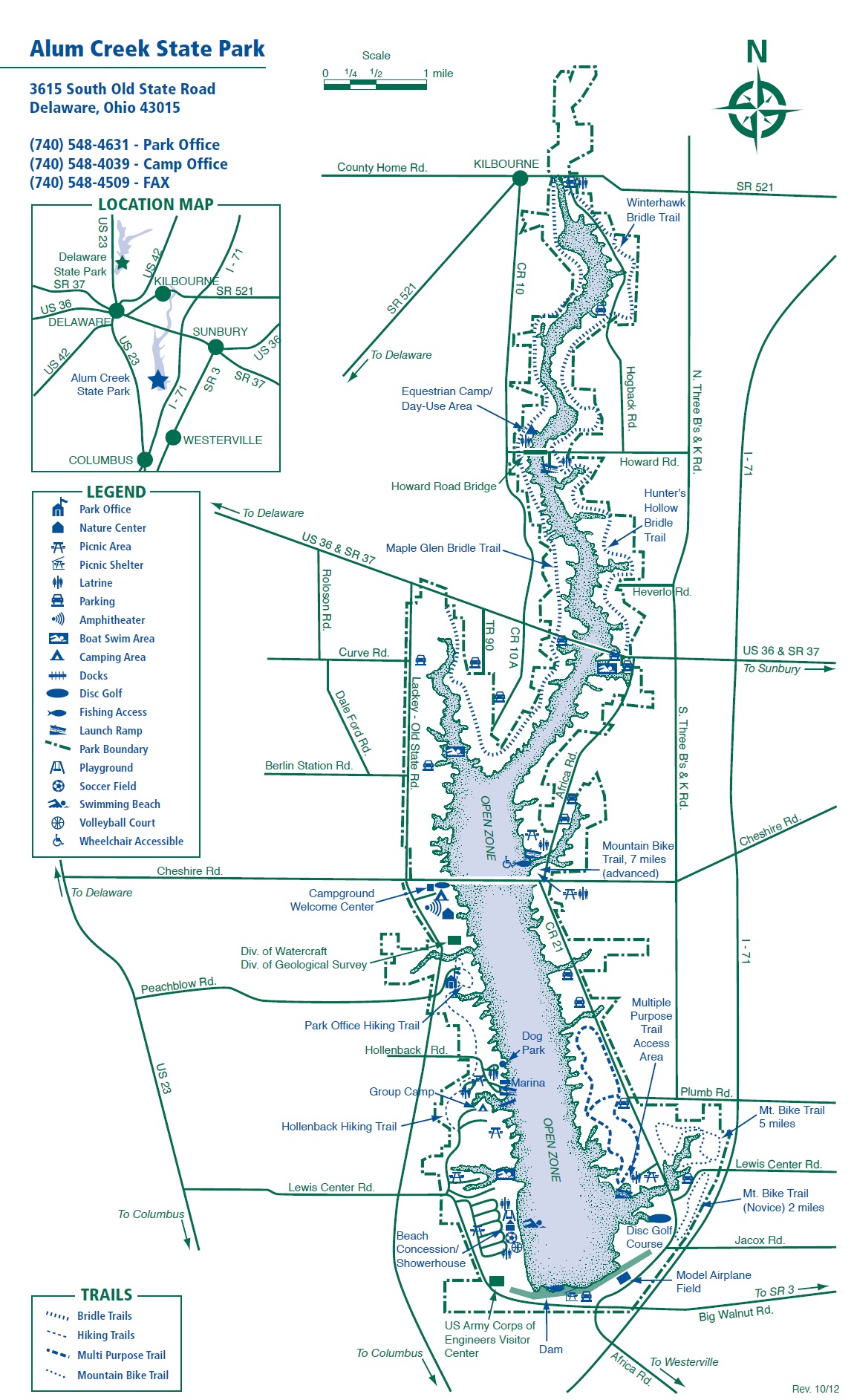