When the water level at the reservoir is low, the east and west sides of Knapp Road near OH-14 become outstanding mudflats that are great habitat for migrating shorebirds. A scope is recommended, and there is a pull-off for limited parking.
From Susan Carpenter

West Branch State Park in Portage County is situated on the glaciated plateau of northeastern Ohio. Although the land was uplifted as part of the Appalachian Mountain building process, the glaciers were able to override the gentle hills of the plateau. Huge ice blocks broke free from the glaciers and kettle lakes formed as the blocks melted. Eventually, these lakes filled with sediment leaving boggy wetlands with unique assemblages of plants. The West Branch area contains numerous bogs filled with buttonbush, alder, skunk cabbage, and swamp white oak.

Another natural feature of the park is the stand of beech-maple forest. In pioneer times, the beech-maple belt in Ohio was very extensive and stretched across the plateau from Mansfield to Pennsylvania. These woodlands harbor a variety of plant and animal life. Woodland wildflowers such as Dutchman’s breeches, bloodroot, and trillium are found here. Red fox, skunk, opossum, and raccoon find the park’s habitat suitable. Songbirds occupy the leafy canopy of the woodlands while waterfowl and shorebirds dabble in the reservoir.
From West Branch State Park webpage

West Branch State Park Trails
The park features more than 14 miles of hiking trails. A portion of the state’s Buckeye Trail passes through the park and is linked to the campground by a 2-mile spur trail.

Wayland Tailwater Trails
There is a parking spot on Wayland Road adjacent to the West Branch that has a trail leading in for about 0.25 miles. This area is mature hardwoods and has good habitat for species that utilize this habitat, as well as some riparian vegetation, although that is thickest just below the dam. After that 0.25-mile trail, it connects in with trails all around the tailwater area below the dam. Here there is a lot of great edge habitat that would be suitable for some early growth species, as well as brush and some field species. It was a superb area for migrants as well and is probably a huge hit for sparrows later in the fall. Overall it had a lot of habitat overlap in a small area providing very high species diversity with a walk of a mile or less.
From Tom Forwood

Descriptions with maps of hikes using West Branch State Park trails are on the AllTrails website. 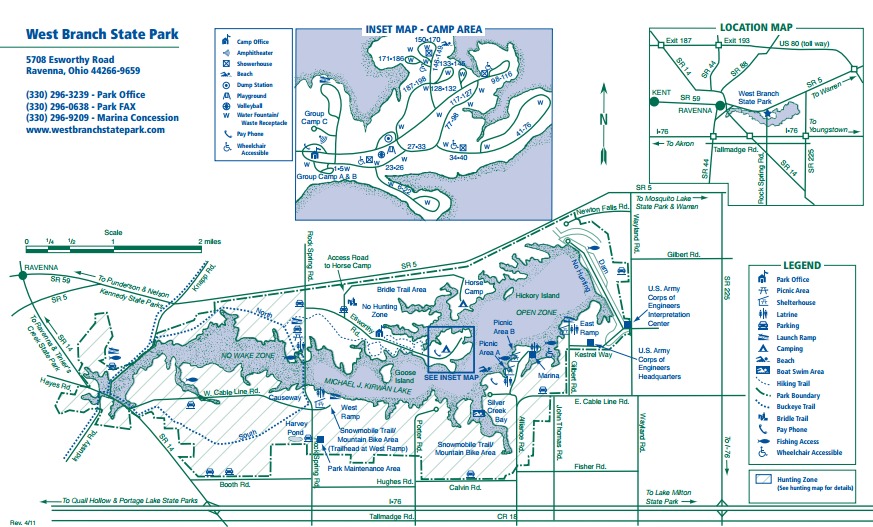