Also, see all the hotspots at:
Fulton County Birding Drive

Originally, Lake Erie was much larger than it is today–stretching from western New York to Fort Wayne, Indiana. The Harrison Lake region was at that time under the waters of Lake Erie. As Lake Erie receded to its present size, the area formerly under water reverted to swamplands. This swamp (120 miles long and 30 to 40 miles wide) became known as the Great Black Swamp due to the color of the soil and dark shade beneath the giant trees.

For many years, the swamp was a tremendous barrier to western settlement. Most settlers avoided the area, traveling around the swamp via Lake Erie to reach southern Michigan. The Ottawa Indians settled only near the well-drained lands beside the Maumee River and its tributaries. The swamp was the last area to be settled in Ohio. It served as a reservation for Indians until they were forced out in 1842. It was not until the development of soil drainage techniques in the 1850s that large numbers of settlers moved here.

Even today, northwestern Ohio remains one of the most sparsely populated regions of the state, although it is one of Ohio’s richest agricultural regions.

In 1836, the United States Congress and the Ohio Legislature finally settled a 10-year argument with the state of Michigan as to the location of the Ohio-Michigan border. For years, both states claimed ownership of a strip of land 11 miles wide that extended from the mouth of the Maumee River near Toledo to the Ohio border with Indiana. Today’s Ohio-Michigan boundary is the one agreed upon in 1836. Had Congress favored Michigan’s claim in that year, Harrison Lake State Park may have become a Michigan State Park!

In 1941, a dam over Mill Creek was completed and Harrison Lake was created. The lake and surrounding area were maintained primarily for hunting and fishing purposes until 1950 when Harrison Lake was established as a state park and development for additional recreational usage began.
Natural Features

The area comprising Harrison Lake State Park was at one time part of a vast wetland. This mysterious area contained towering trees, soggy black soil and was a haven for the swamp rattlesnake (or massasauga, as it is also known). Very little remains of that once great swamp, but the park still harbors unique natural features associated with wetlands.

A circuit hike of the lake using the park trails is 3.5 miles.

A description with a map of a 4.5-mile hike using the park trails is available on the AllTrails website. 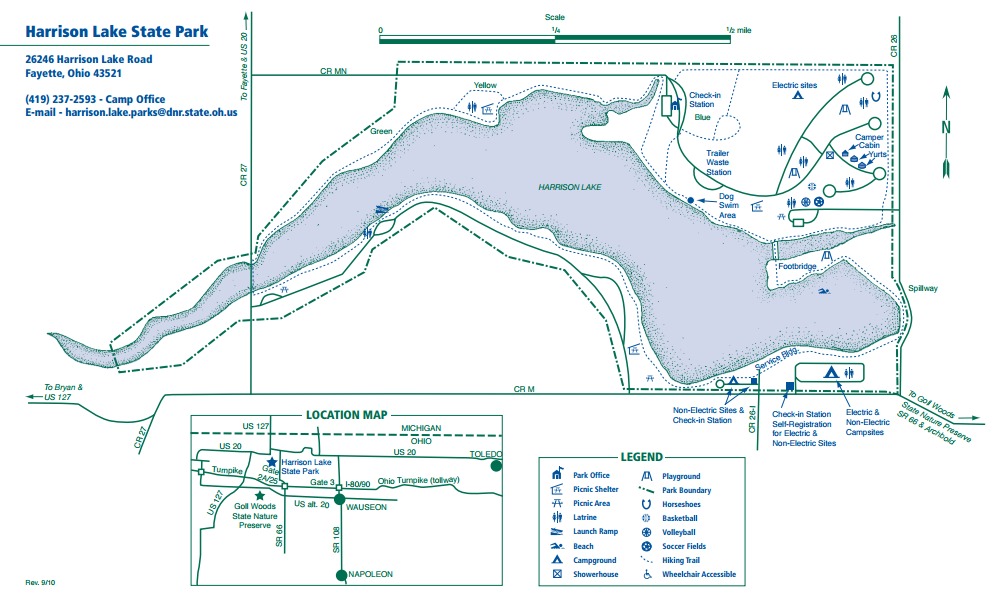