The parking lot of the former Airport Observation Tower provides a place where birders may park to view birds.

Ohio State’s 1,764-acre main campus is about 2.5 miles north of downtown Columbus. The historical center of the campus is the Oval, a quad of about 11 acres. Four buildings are listed on the National Register of Historic Places: Hale Hall (originally Enarson Hall), Hayes Hall, Ohio Stadium, and Orton Hall. Unlike earlier public universities such as Ohio University and Miami University, whose campuses have a consistent architectural style, the Ohio State campus is a mix of traditional, modern, and post-modern styles. The William Oxley Thompson Memorial Library, anchoring the Oval’s western end, is Ohio State library’s main branch and largest repository. The Thompson Library was designed in 1913 by the Boston firm of Allen and Collens in the Italianate Renaissance Revival style, and its placement on the Oval was suggested by the Olmsted Brothers who had designed New York City’s Central Park.

To the south of the Oval is another, somewhat smaller, expanse of green space commonly referred to as the South Oval. At its eastern end, it is anchored by the Ohio Union. To the west are Hale Hall, the Kuhn Honors House, Browning Amphitheatre (a traditional stone Greek theatre), and Mirror Lake.

For 148 years, The Ohio State University’s campus in Columbus has been the stage for academic achievement and a laboratory for innovation. It’s where friendships are forged. It’s where rivalries and revelry are born.

The university’s main campus is one of America’s largest and most comprehensive. As Ohio’s best and one of the nation’s top-20 public universities, Ohio State is further recognized by a top-rated academic medical center and a premier cancer hospital and research center. As a land-grant university, Ohio State has a physical presence throughout the state, with campuses and research centers located around Ohio.

Content from The Ohio State University webpage and Wikipedia 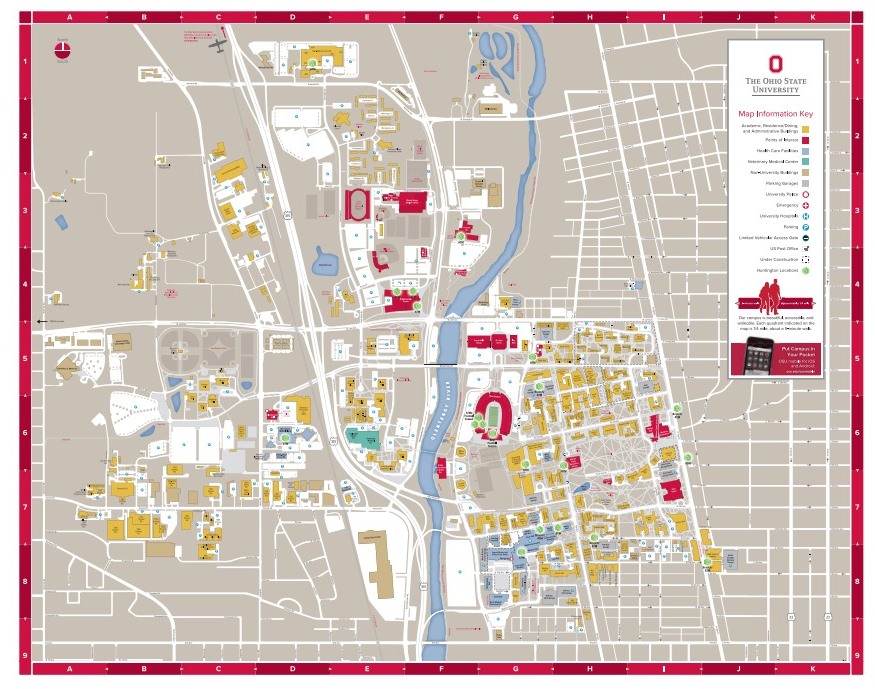