Also, see all the hotspots at:
Auglaize County Birding Drive

Fort Amanda is a small park but includes a sycamore-lined riparian corridor along the Auglaize River which is accessed from atop a high bank putting you eye-level with much of the vegetation. Should provide good viewing of migrants and could have nesting warblers.

Fort Amanda was one of a series of forts extending north from Piqua to Fort Meigs (present day Perrysburg), built by order of General William Henry Harrison. These forts helped supply the army protecting the Northwest from British invasion during the war of 1812. Fort Amanda’s construction began in the fall of 1812 under the direction of Lt. Col. Robert Pogue who named it Amanda in honor of his 12-year-old daughter. The original fort is believed to have measured 160 feet by 160 feet. Located at the head of navigation of the Auglaize River, it had a small landing with a boat yard and served as a supply post and hospital. Soldiers built riverboats or pirogues to transport soldiers and supplies. Approximately 75 pirogues were built during the winter of 1812-1813.

Although Fort Amanda saw no fighting during the war, it served as an important link in this supply line. On December 24, 1814, the United States and Britain signed the treaty of Ghent, which ended the war. By early 1815 the fort was abandoned and eventually taken over by local settlers. In the cemetery near the fort are 75 headstones dedicated to the memory of unknown American soldiers of the war of 1812. Some speculate these mark the graves of soldiers who were casualties of wounds or disease.

The original fort is no longer standing but a granite monument was built in 1915 at the site of the original fort. The monument, as well as the cemetery, can be viewed during daylight hours. Ft. Amanda State Memorial is more than a historic site. It is home to a rich variety of plants and animals. Trails lead through wooded ravines, down to the river, or out to the monument.

Fort Amanda State Memorial is owned by the Ohio History Connection and operated and maintained by the Johnny Appleseed Metropolitan Park District. 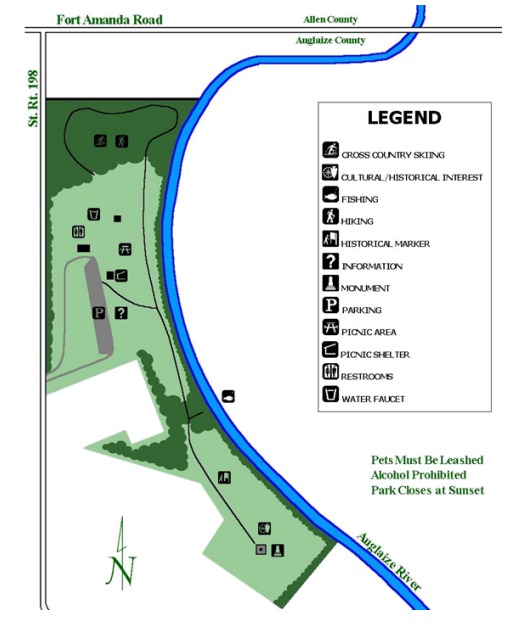