Also, see all the hotspots at:
Indian Hollow Reservation

Although Indian Hollow is actually made up of four separate tracts of land that will one day be linked by trails, Sheldon Woods and the Midview Soccer Complex are open to the public. Sheldon Woods is made up of 180 acres of mostly wooded land bisected by the eastern branch of the Black River. The facilities are all on the southern side of the river, with two picnic shelters, a playground, a soccer field, and restroom facilities, while the quarries and trails are on the northern side.

In 2015 the former Royal Oaks golf club became part of the Lorain County Metro Parks’ Indian Hollow Reservation, joining two separate parcels of the reservation and expanding it to 726 acres.

Walking, running, and biking the trail are probably the most popular activities at Indian Hollow. Almost two miles in length, you can pick it up either at the trailhead by the restroom facilities or at OH-57 at the Grafton city entrance. Fishing can also be done in the river at Indian Hollow. The trail is unique in the park system because it is the only one where mountain bikes are allowed due to its rugged sandstone base. Through a partnership with Cleveland Free Riders, separate mountain bike trails have been added and improved with obstacles for those more daring. In the next few years, plans include creating trails with differing degrees of difficulty and new obstacles.
From Indian Hollow Reservation webpage 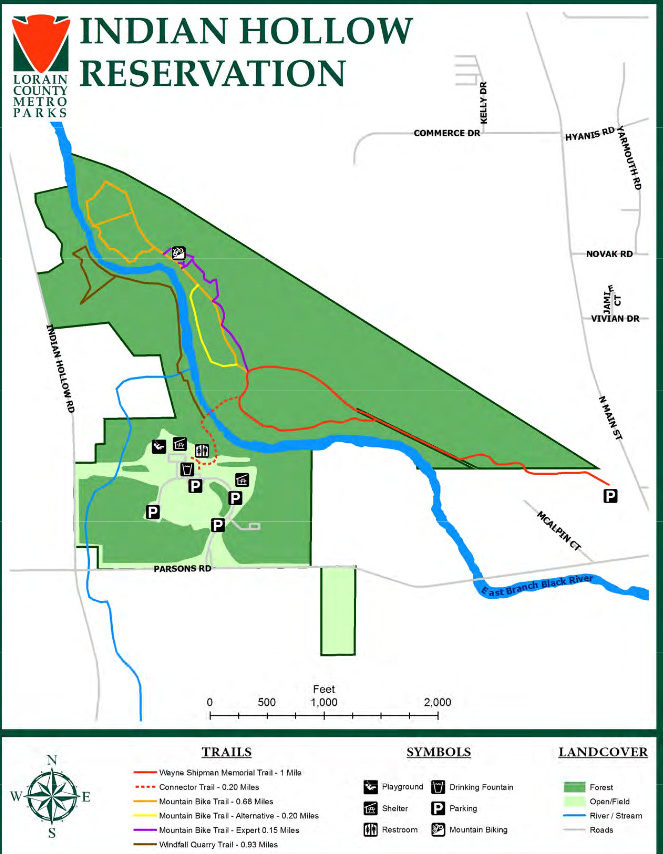