Sunnybrook Preserve is a 73-acre preserve in eastern Chester Township. Throughout most of the twentieth century, the property was maintained for horticultural purposes. It is Geauga Park District’s intent to protect this natural area in perpetuity.

In 1928 Dr. Harold and Edith Ruh purchased 170 acres in Chesterland to establish Sunnybrook Farms Nursery as a commercial venture, but also to provide their children with “a chance at productive living outdoors.” The business stayed in the family for decades to come, with responsibilities passing to son Peter Ruh and his wife Jean, then to their son Tim and daughter Janet.

In 2001, Peter and Jean Ruh set up a conservation easement on their property with Chagrin River Land Conservancy (now known as Western Reserve Land Conservancy) to protect their family lands for generations to come. The Conservancy purchased the land, then according to the Ruh’s wishes, sold 72 acres to Geauga Park District to be used as a public park.

Sunnybrook Preserve has many unique habitat features. The northeastern corner of the property is dominated by unique wetlands, including a fen, which is fed by alkaline, mineral-rich groundwater and characterized by distinctive flora. This fen is home to several “listed” species, including the American Cranberry Bush, which is an “endangered” species in Ohio. Any proposed trails will avoid this section of the property.

The preserve also features a sedge grass meadow and a conifer forest that provide a home for a very diverse list of wildlife. A ravine and cool spring run north to south through the eastern portion of the property. The rolling terrain of Sunnybrook Preserve was created by glacial deposits.

The conifer forest of Sunnybrook Preserve attracts several birds of interest including Dark Eyed Juncos, Black Throated Warblers, and Wood Thrush. The woodland sections of the property are also home to the Woodland Jumping Mouse (a species of concern), Short-tailed Shrew, Hoary Bat, and Mink. The cool waters of the spring host a population of Redside Dace and Southern Redbelly Dace.

More than 1.6 miles of peaceful nature trails provide views of cool springs, woodland vernal pools, and glacial deposits that make up the preserve’s rolling terrain. An observation deck located on the eastern ridge overlooks a tributary of the East Branch of the Chagrin River and treats visitors to beautiful views of the steeply sloped ravine. Hiking, birdwatching, nature discovery, and cross-country skiing are just some of the popular activities that visitors can enjoy throughout the year. 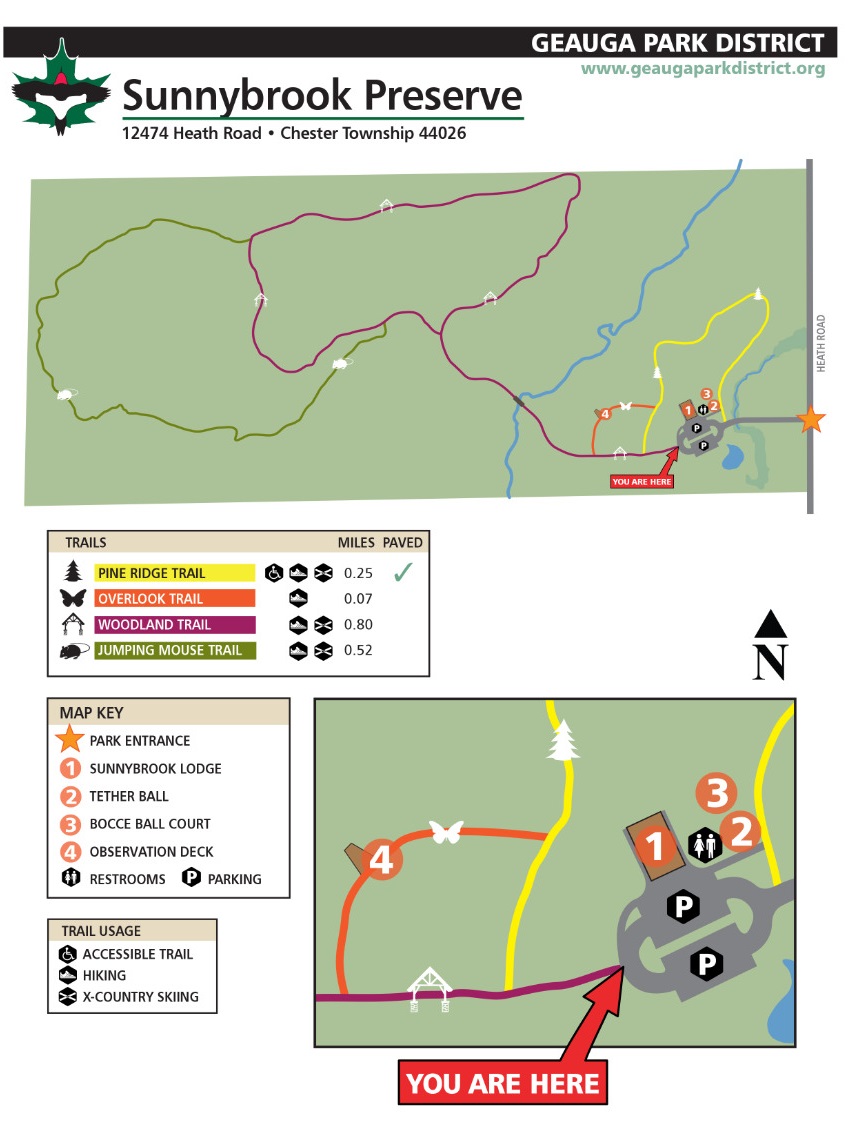