Also, see all the hotspots at:
Greene County Birding Drive

To bird Huffman Prairie Flying Field, park on Pylon Road, and walk the mowed path on the east side of the road.

In May and June, there are reliable Bobolinks, Henslow’s and Grasshopper Sparrows, Meadowlarks, and Dickcissels. In July and August, Sedge Wrens arrive and are easy to hear. In the winter, Short-eared Owls and Northern Harriers use the field, and migrating Rough-legged Hawks have been reported.

Huffman Prairie Flying Field
On this 84-acre patch of rough pasture outside Dayton, the Wright brothers learned to control and maneuver their powered machine and taught themselves to fly between 1904 and 1905. Designated a National Historic Landmark in 1990. The Flying Field is located on an active military installation and is subject to unannounced closure.

Five Rivers MetroParks has partnered with Wright-Patterson Air Force Base to restore and manage the Huffman Prairie since 1988. In the summer of 2015, thanks to an $11,700 grant from the Ohio Environmental Education Fund, the site will received an update as part of the Discover Huffman Prairie project. New interpretive signs and plant identification markers, as well as brochures, will help visitors learn about this significant conservation site.

Previously, only scant information was available about this site, located on Wright-Patterson Air Force Base and adjacent to the Huffman Prairie Flying Field, where the Wright brothers tested their planes. Today, the Flying Field is part of the Dayton Aviation Heritage National Park.

Many rare plants, birds, and insects make the prairie their home. Indeed, Huffman Prairie hosts one of the best displays of Ohio prairie grasses and flowers, as well as impressive populations of rare grassland birds, such as bobolinks, dickcissels, and sedge wrens. Other unusual species documented on the prairie include the smooth green snake, thirteen-lined ground squirrel, and more than 200 species of butterflies and moths — including one found only in this prairie.

Today, the Huffman Prairie State Natural Landmark is one of the largest prairie remnants in Ohio. Prior to European settlement, prairies were common in the valley of the Mad River in southwest Ohio. Some were wet prairies, thriving where the groundwater was near the surface. Some were mesic prairies growing in moist, well-drained floodplains, and some were xeric prairies growing on thin soil and south-facing slopes. Huffman Prairie includes each type but primarily consists of a mesic prairie. Since the 1800s, nearly all of the prairies of eastern North America have been lost.

During the past 25 years, MetroParks has helped with the harvesting of seeds, restoring degraded sections of the prairie, helping with controlled burns, and coordinating research projects. The site is open to the public daily, and a short, easy-to-hike trail winds through the prairie. For bird watching, June is the best time to visit, and for the most spectacular display of wildflowers, visit in mid to late July.

To visit the site by car, enter through WPAFB gate 16A and follow the signs to Huffman Prairie.

Wright Cycle Company Building
The fourth location of the bicycle shop operated by the Wrights is the only building remaining as a testament to their bicycle business. Designated a National Historic Landmark in 1990.

Hoover Block
Wilbur and Orville Wright operated Wright & Wright, Job Printers, on the second floor of the Hoover Block from 1890 to 1895. The building is part of the Wright-Dunbar Visitor Center. Added to the National Register as part of the West Third Street Historic District in 1988.

1905 Wright Flyer III
The world’s first practical airplane, built by the Wright brothers in 1905 and flown at Huffman Prairie Flying Field, is the centerpiece of the Wright Brothers Aviation Center at Dayton History’s Carillon Historical Park. Designated a National Historic Landmark in 1990.

Hawthorn Hill
In 1914, Orville Wright, Katharine Wright, Milton Wright, and servants Charles and Carrie Kayler Grumbach moved into this large Georgian revival-style mansion in Oakwood. Orville lived at Hawthorn Hill until his death in 1948. Designated a National Historic Landmark in 1991.

Paul Laurence Dunbar State Memorial
Paul Laurence Dunbar lived in this house in west Dayton with his mother, Matilda Dunbar, from 1904 until his death in 1906. After Matilda Dunbar’s 1936 death, the state of Ohio acquired the property and opened it for public visitation as the first house museum commemorating an African American. Designated a National Historic Landmark in 1962. 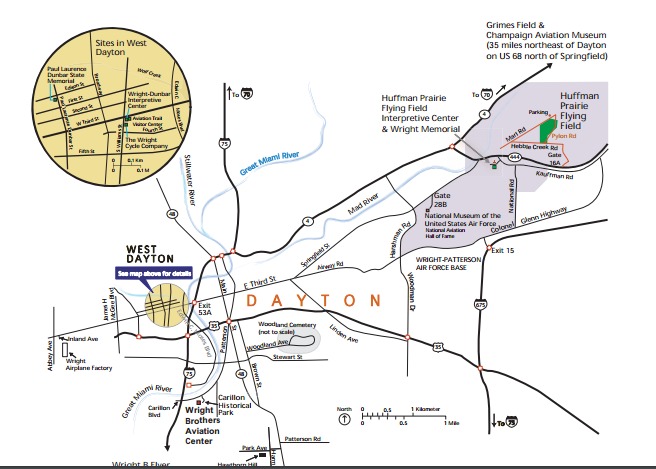