Of Metzger Marsh’s 900+ acres, 558 are the Ohio Division of Wildlife’s property; the rest belong to Ottawa National Wildlife Refuge and are closed to public access. The Ohio Department of Wildlife has built a paved access road, a marina, and a fishing pier, in addition to the dike. The long dike has a small opening intended to allow water levels in the impoundment to fluctuate with those of Lake Erie. The vegetation inside the impoundment has been in flux: cattails, Phragmites, open water, or seedling trees have been dominant features at various times since the diking. The mudflats and shallows that once attracted shorebirds, larid roosts, etc., seem to be a thing of the past.

In recent years, impenetrable tall growths of Phragmites reed have prevented viewing of the impoundment from the west, but views of the open water areas from several parking areas along the road past the marina sometimes reveal ducks in migration, overhead gulls and terns, swallows, bald eagles, herons, egrets, and more. A few shorebirds tolerant of deeper water, e.g., yellowlegs, spotted sandpipers, egrets, and herons, may be seen. Ducks in season are more numerous in deeper water close to the dike and are most easily approached by parking in the last lot by the fishing pier and walking east atop the dike. Other ducks and fly-by birds can be seen on the lakeward side of the same walk.

There are several pull-offs, along the road to the end where there is a parking lot.

Metzger Marsh is a stop on the Lake Erie Birding Trail.

Winter
American Bald Eagles can often be seen in the eastern, more wooded portion of this marsh.
Spring
The trees and brush surrounding the last parking lot frequently act as a migrant trap in spring, and it is at this time, and in this rather small and scraggly aggregation of willows and cottonwoods and garlic mustard, that Metzger attracts the most attention from birders these days. It is always worth checking from late April through early June.
Summer
Several years ago, there were sightings of Yellow-headed Blackbirds here for two consecutive years.
Fall
In the past, this has been a staging area for large numbers of swallows which can be observed flying over the marsh and lined up on the wires in the area of the marina.

This 558-acre Lake Erie marsh is located 13 miles east of Toledo. Bono Road provides access to the area from OH-2, less than .5 mile east of Bono. Water levels in the marsh are managed to provide optimum vegetation for wetland wildlife. Water depth in the marsh ranges from one to four feet.

Metzger Marsh is a remnant of the 300,000-acre marsh which once bordered most of western Lake Erie from Vermilion, Ohio to Gibraltar, Michigan. The construction of a high retaining dike and an internal pattern of drainage canals in conjunction with a large steam-driven, water-life elevator allowed the Metzger Farms to operate throughout the early 1920s as a highly productive truck crop farm. In 1929, the waters of Lake Erie broke through the dikes and flooded the area. The dikes were not rebuilt and with the loss of water control, the area reverted rapidly to its original marsh condition and became high-quality duck habitat. For several years, extremely good waterfowling was enjoyed by members of the Metzger Marsh Duck Club. High water levels in the 1940s eroded the remaining beach barriers and by 1952 the marsh resembled a cove off Lake Erie. Presently, about 70 percent of the area consists of open shallow water.

The marsh was purchased by the Division of Wildlife in 1955. Waterfowl hunting, trapping, and fishing in the marsh and Lake Erie are major uses of the area. The outer dike was restored in 1995 to allow for water level management. This work was accomplished through a cooperative effort between the U.S. Fish and Wildlife Service, Ducks Unlimited, local conservation groups, and the Ohio Division of Wildlife.

There are portable toilets at the parking lot at the end of Bono Road and at the boat ramp near the Cooley Canal Yacht Club.

The boat ramp on Bono Road and the fishing pier at the end of the road are both handicap-accessible. 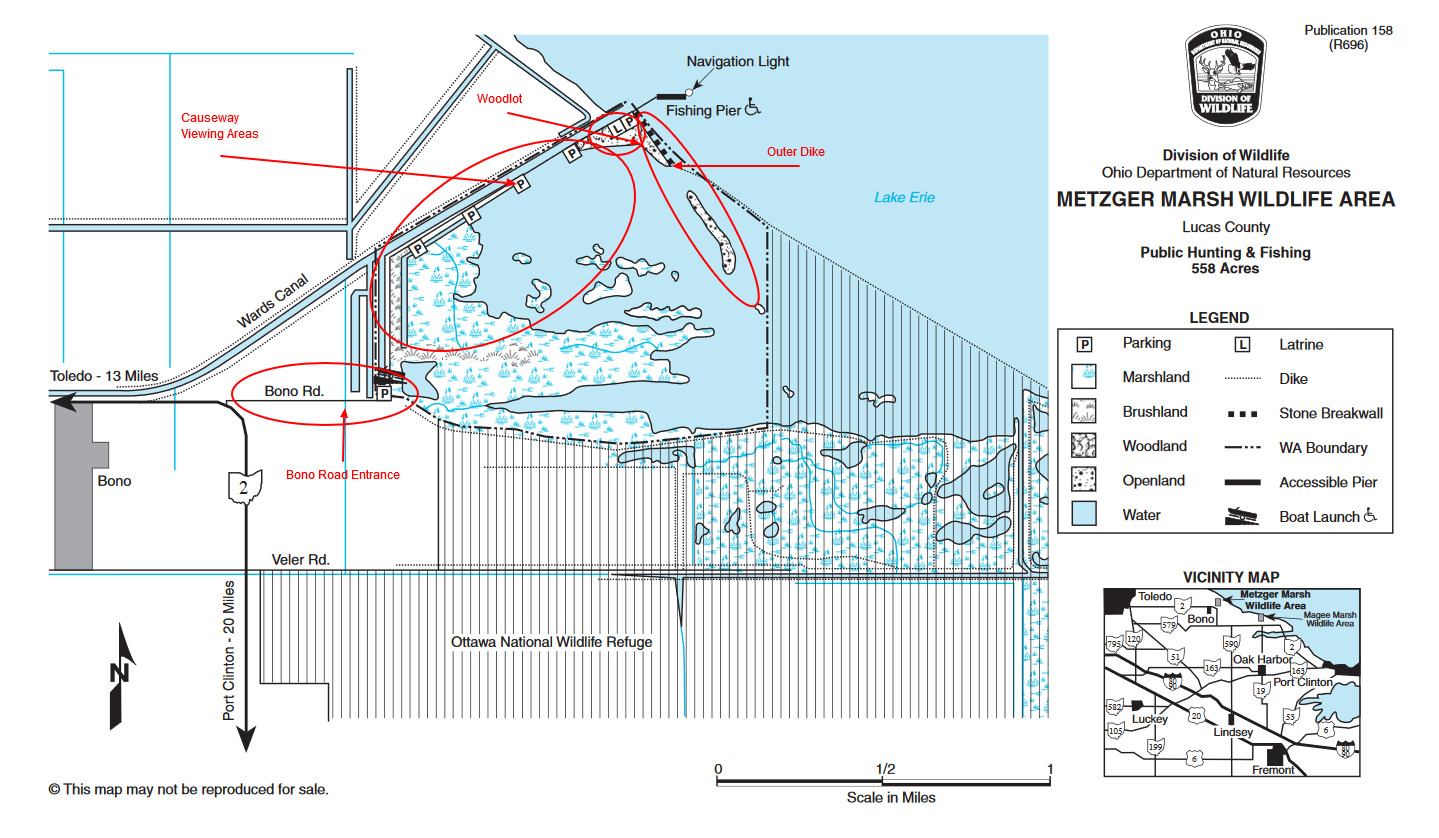