Poston Plant Lands is American Electric Power reclamation land a little over 2 miles west of The Plains in Athens County. Take OH-682 to Poston Road near the OH-33 interchange and head west. At Industrial Drive, turn right and keep right to follow the gravel road to a gate where you can pull off and park. The gravel road is flat and pretty even, but the gate is usually closed to car traffic and access for birders does involve traversing some uneven and not very accessible ground around the right side of the gate.

In April you will find Brown Thrasher, Field and Song Sparrows, White-eyed Vireo, Eastern Meadowlark, Prairie Warblers, and Yellow-breasted Chat. In the evening, you will hear and see the displays of the American Woodcock and might even hear a passing through Whip-poor-will. Around a mile in, you will enter a mix-forested area that becomes the Athens Conservancy Bluebell Preserve (yes, take time to enjoy the wildflowers), and will find Yellow-throated Warbler, Louisiana Waterthrush, Northern Parula, Cerulean Warbler, and American Redstart. In about another mile, this road ends up at the Hockhocking Adena Bikeway.

Do be mindful of hunting season.

This 2,240-acre Poston Plant Lands Public Hunting Area lies in the northwestern portion of Athens County. Many county and township roads provide direct access to several major tracts. In combination with surrounding Wayne National Forest lands, a block of nearly 50,000 acres of public hunting land is available in this region. This area is situated in the hilly unglaciated Allegheny Plateau and consists primarily of rounded ridges, steep slopes, and narrow ravines. Numerous old fields reverting to forest are intermixed with woods which are generally second and third growth timber. Oak and hickory dominate the ridges and upper slopes. Tulip, poplar, beech, maple, and red oak are frequent lowland and ravine tree species.

This property is the former Poston Power Station that is owned by American Electric Power (AEP). The company is one of the major owners of land and mineral properties in southeastern Ohio. The AEP Company has developed a long-range timber management plan, under which foresters will harvest timber on a sustained yield basis. On much of the area, short-term cutting rotations will be employed for the production of pulpwood. On the better growing sites, the trees will be managed for larger timber. In 2006 AEP Company and the Ohio Department of Natural Resources Division of Wildlife entered into a cooperative agreement permitting public hunting, trapping, and fishing. Hunting is the major recreational use. Other uses include fishing, mushroom and berry picking, hiking, nature study, and bird watching.

Gray squirrel, ruffed grouse, deer, raccoon, and gray fox are the principal game and fur species on the area. Fox squirrels, rabbits, opossums, skunks, red foxes, and muskrats are present in smaller numbers. Wild turkeys that have become established in adjacent portions of the Wayne National Forest also use some tracts of this wildlife area. Grouse and deer will increase as a result of the forest management work being done. A rich variety of songbirds is found on the area in association with the diverse mixture of habitat types.

A free permit is required to enter the ReCreation Land recreation area. The permit may be downloaded from the American Electric Power website. 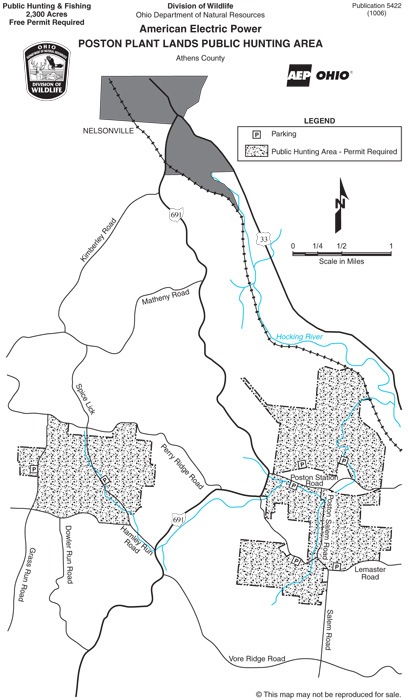