At 9390 acres (and an additional 250 acres of State Park land), Scioto Trail is far smaller than the Shawnee and Zaleski State Forests. Its location, however, makes it a top site in Ohio for both birds and birders. The forest was named after the Scioto Trail, a historic trading route established by native Americans from between present-day Portsmouth on the Ohio River and Chillicothe. Today US-23 follows that trail. Scioto Trail State Forest lies east of US-23 in a large bend of the Scioto River at the northern edge of the unglaciated plateau. Migrants moving up the Scioto River in the spring can be found in denser concentrations in this bend of the river than in other large state forests in Ohio. Its location along US-23 also makes it a convenient drive from the north, less than an hour’s drive from I-270 in Columbus.

Like all of Ohio’s large state forests, Scioto Trail State Forest offers ridge habitat and bottomlands along river courses. A birding trip there should sample both. A suggested birding route would be to start at the fire tower at the entrance to the forest and slowly bird your way along the North Ridge (FR-2). The North Ridge offers a good sample of many resident songbirds and can have large concentrations of migrants, especially early in the morning from late April through mid-May. When reaching the intersection of the paved FR-1, head east to the parking lot for the bridle trail. A walk down the bridle trail along Stony Creek starting on the north side of the parking area offers a good sample of a different variety of birds. Crossing the stream is usually possible with ankle-high boots. More bottomland habitats can be explored further west along FR-1 by parking in one of the lots near Caldwell Lake and walking around the area. Allow for a full morning to cover those areas in spring. The South Ridge (FR-6) is usually not as productive as the North Ridge, but nesting Pine Warblers can be found at a few spots in the western end. Hatfield Road (FR-5) can be interesting, but unfortunately, that road has been closed recently.

The entrance is well signed along US US-23 between Chillicothe and Waverly. The east side of the forest can be reached from US-35 by crossing the Scioto River on Higby Road (consult maps).

Open all year during daylight hours.
From Ohio Ornithological Society

Winter
The full range of wintering Ohio forest birds can be found, mostly along the river courses. The gravel roads along the ridges aren’t plowed in the winter.
Spring
Spring is when birding is at its peak. Nesting warblers and other passerines arrive throughout April and early May. Nesting warblers include Blue-winged, Northern Parula, Yellow-throated, Pine, Cerulean, Black-and-white, American Redstart, Worm-eating, Ovenbird, Louisiana Waterthrush, Kentucky, Common Yellowthroat, Hooded, and Yellow-breasted Chat. Among the long list of other nesting birds are Ruffed Grouse, Black-billed and Yellow-billed Cuckoos, Barred Owl (often conspicuous during the day in the early spring), Whip-poor-will, Eastern Wood-Pewee, Acadian Flycatcher, Eastern Phoebe, White-eyed, Yellow-throated, and Red-eyed Vireos, Indigo Bunting, and both Scarlet and Summer Tanagers. Migrants heading further north peak in numbers during early May. Any bird that regularly migrates through Ohio can be found, but certain arboreal warbler species congregate in very large numbers. For example, it is possible to encounter well over 100 Tennessee Warblers during the second week of May during a morning drive. Nashville, Yellow-rumped, Black-throated Green, Blackburnian, Blackpoll, and Bay-breasted Warblers can also be especially numerous during peak migration periods.
Summer
The resident nesting birds can all be found, but due to the dense vegetation, they are less easy to see than when they arrive in the budding vegetation in spring. Many species stop singing by early July and are difficult to locate.
Fall
Good numbers of migrants pass through STSF in the fall also, but they can be difficult to detect as they silently move through the still dense vegetation in September and early October. Late October is a wonderful time to visit the forest to look for stragglers amidst the beautiful autumn colors.

Located in the Appalachian foothills bordering the Scioto River, the park’s rugged ridge tops and wooded valleys support a host of natural wonders. This densely forested hill country is reminiscent of the southern Appalachians supporting a magnificent stand of oak and hickory. In spring, the forest trails are lined with flowering dogwood and redbud trees. The forest floor displays woodland wildflowers including spring beauties, Dutchman’s breeches, wild blue phlox, and wild geranium. Ferns, mosses, and lichens coat the sandstone outcroppings. Mushroom hunters delight in the abundance of the delicious morel mushroom.

The remoteness of the area and dense forest provides excellent habitat for some of Ohio’s most elusive wildlife. Wild turkey populations are thriving in this region along with ruffed grouse and white-tailed deer. Small mammals of Scioto Trail include red fox, skunk, opossum, gray squirrel, and raccoon among many others. Rare sightings of bobcat and black bear have been reported. Many reptiles and amphibians find the woodlands and streams of the area desirable.
From Scioto Trail State Park webpage 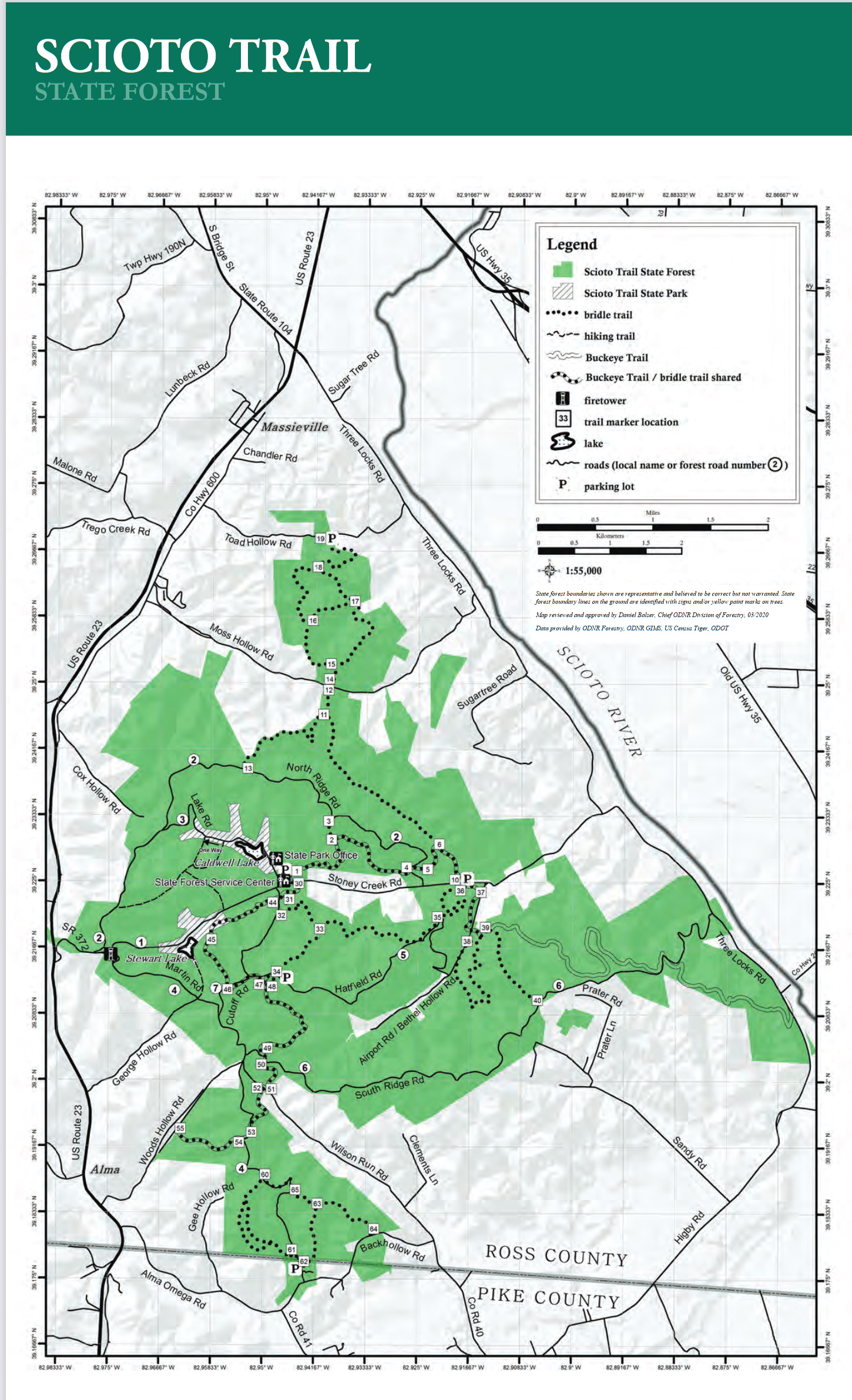 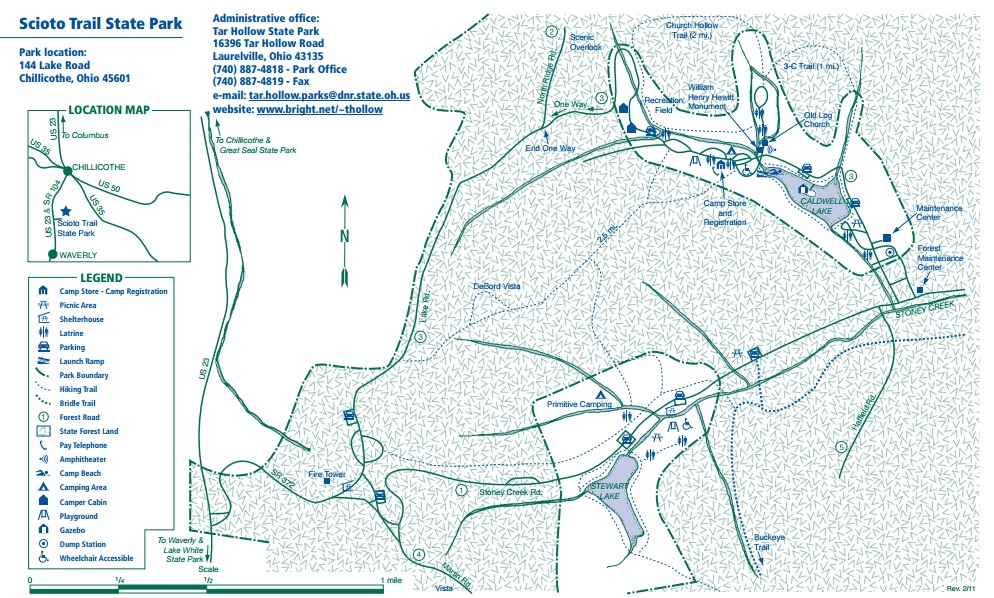