Shawnee State Forest is the largest state forest, consisting of 60,000 acres. It is mainly a mixed hardwood forest with some stands of hemlocks occurring in the deeper, wetter hollows. The forest has many miles of roads making it easy to cover a large area when birding. Some of the roads are paved, and others are packed gravel, but all of them can be easily traveled in any type of vehicle. When birding this area, a map of the forest is a necessity and can be obtained at the forest headquarters or online. The best time to bird the forest is mid-April through mid-May. After this, the foliage gets very thick and makes birding more difficult. The most efficient way to bird the forest is to drive the roads, stopping often to listen for birds. Familiarity with the songs of the expected birds is useful. The birds can often be difficult to see as they flit among the treetops, but patience will be rewarded with good looks.

Cars can be parked anywhere along forest roads as long as they are not blocking traffic. Look also for pull-offs throughout the area.
From Ohio Ornithological Society

Shawnee State Forest spans two counties. The western portion is in Adams County, the eastern portion is in Scioto County. See the map for the location of the county line. If you carefully keep your bird records by county, be sure to use the specific hotspots in this state forest so that the birds will be assigned to the proper county.

Once inhabited by the Shawnee Indians, Shawnee State Forest came into existence in 1922 with the purchase of 5,000 acres of land which had been cut over for timber and ravaged by fire. During that same year, land acquisition was begun for the Theodore Roosevelt Game Preserve. In the 1930s, six Civilian Conservation Corps camps were located in the forest. During this period, many of the roads were constructed in the then nearly inaccessible area. Many other accomplishments resulted, including five small lakes that were built to serve as water supplies for the camps. Following the creation of the Department of Natural Resources in 1949, the recreational facilities at Roosevelt Lake were transferred to the Division of Parks. The Roosevelt Game Preserve, by a 1951 agreement between the Division of Forestry and Wildlife, became a part of the forest.

Shawnee State Forest, also called “The Little Smokies of Ohio,” has developed into the largest of the 20 state forests, with over 60,000 acres. While the Forest is a fantastic recreation feature in Southern Ohio, you should not be surprised to see other activities occurring. The Forest is a working forest. It is managed to provide a variety of multiple uses on a sustained yield basis.

Timber harvesting, tree planting, wildlife habitat, forestry research, watershed and soil protection, and production of tree seeds are all in a day’s work for Forest Employees and many local residents. During the spring and fall forest fire danger periods, state forest crews detect and suppress wildfires that occur on state and private lands within the surrounding protection area.

Nearly 8,000 acres of the forest have been designated as wilderness. Timber management activities and public motorized travel have been eliminated in the area.

In the mid-1800s and early 1900s, building stone was quarried from Vastine and Cabbage Patch hollows. The stone was moved by railroad to the Ohio River and loaded on barges. Much of the stone was used in the construction of buildings in Cincinnati.
From Shawnee State Forest website

An additional 75 miles of bridle trails with 58 primitive equestrian campsites are located within the adjacent Shawnee State Forest.

The AllTrails website has descriptions of hiking trails, forest trails, views trails, and more, with hand-curated trail maps and driving directions as well as detailed reviews and photos from hikers, campers, and nature lovers. There are 7 moderate trails in Shawnee State Park ranging from 1.5 to 8.5 miles. 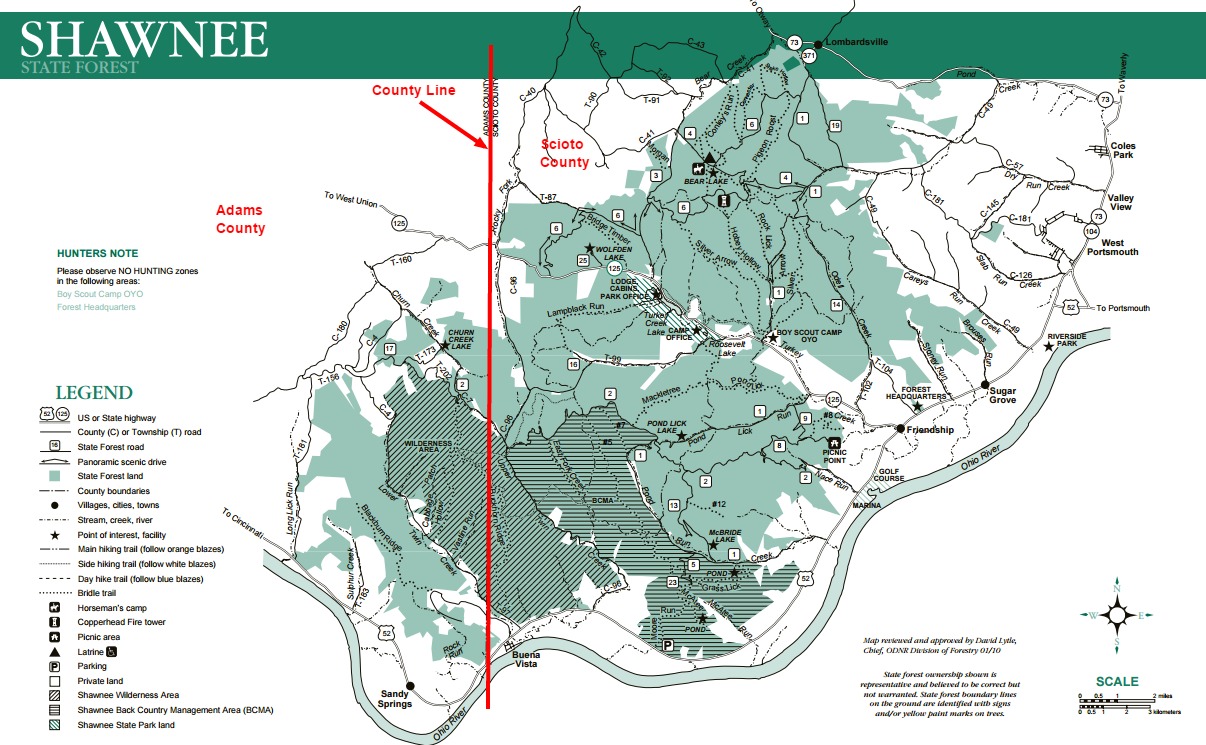