Everett Covered Bridge, which crosses Furnace Run, is the only remaining covered bridge in Summit County. But in the 19th century, it was one of over 2,000 in Ohio, the state that led the nation in covered-bridge construction.

The bridge played an important role in the 19th-century transportation system. Local histories emphasize the role of the Ohio & Erie Canal. With the canal, farmers could ship products to Cleveland and beyond. But to get to the canal and other local destinations, people needed functional roads. Creek crossings posed a challenge for early roads. Their treacherous nature is illustrated by the story of the origins of Everett Covered Bridge. Whether this incident actually led to the bridge construction is uncertain. However, it certainly represents the real hazards of the time. On a winter night in 1877, valley farmers John Gilson and his wife had to cross Furnace Run when returning home from visiting friends. A winter storm had caused the waters to rise and ice to obstruct the ford they would have used. In passing around the ford, Mrs. Gilson was thrown into the stream. Mr. Gilson lost his footing and was dragged by his horse into deeper water. Mrs. Gilson was rescued, but Mr. Gilson’s body was not recovered until four days later.

The story continues that the bridge was built in response to this tragedy. In truth, the date of construction is unknown and could have predated the drowning. However, clues suggest that it was built close to the time of the incident. Covered bridges are truss bridges with support coming from a framework of beams. The builders of Everett Covered Bridge used a truss pattern patented by Robert W. Smith of Tipp City, Ohio, in 1867. The bridge was also unlikely to have been built much after the 1870s. The popularity of covered bridges waned in the 1880s with the appearance of more durable iron bridges like the one seen at Station Road Bridge Trailhead.

Everett Covered Bridge was repaired at least twice after major damage, first caused by the 1913 flood and then by a truck in 1970. Then in 1975, rushing water from a spring storm lifted the bridge from its sandstone abutments and deposited the wreckage into the stream bed below. Local citizens, rallied by the park friends group (then called Cuyahoga Valley Association; now called Conservancy for Cuyahoga Valley National Park), began raising funds to rebuild the bridge. School children, local citizens, private organizations, and governmental agencies all joined hands to secure funds for the historically accurate reconstruction, completed by the National Park Service (NPS) in 1986.

Everett Road Covered Bridge Trails
The Everett Road Covered Bridge Trails hotspot includes the area in the Cuyahoga Valley National Park around the Everett Covered Bridge. There are three trails that start from the parking lot:
1. The Furnace Run Trail, 2 miles, moderate to difficult
(This is not to be confused with the separate Furnace Run Metro Park farther to the north. That park is part of the Summit County Metro Parks.)
2. The Riding Run Trail, 4.6 miles, moderate to difficult
3. The Perkins Trail, 2.7 miles, difficult

These wooded trails can be challenging to walk as there are many hills. 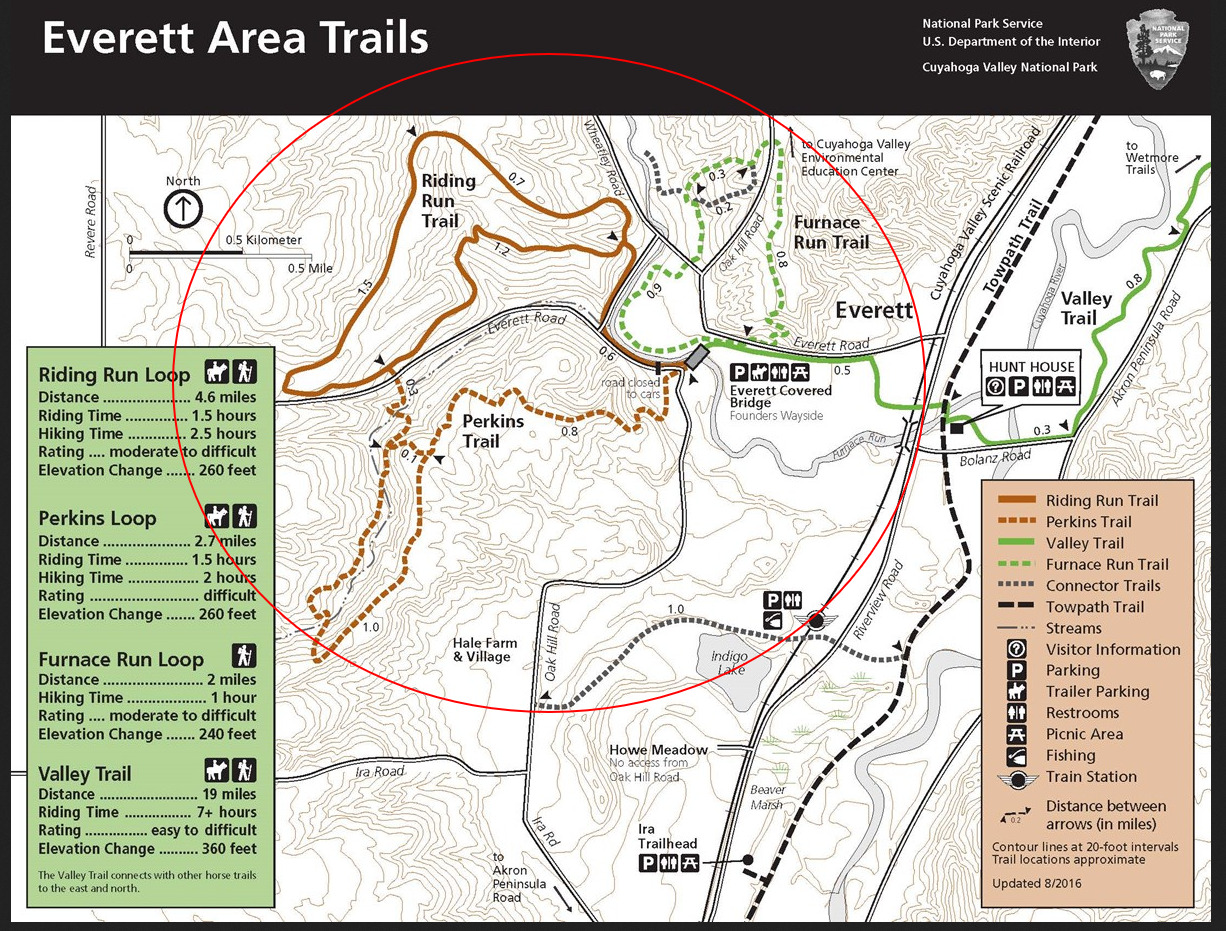