The Franklin-Fairfield county line basically follows the western and northern boundaries of the Walter A. Tucker Nature Preserve — areas north (Ashton Pond) and west (picnic areas) are in Franklin county, and the preserve itself and areas farther south and east are in Fairfield county (see map ).

Trails that span counties are the Beech Trail loop around Ashton Pond, which is mostly in Franklin county with the southern part of the Beech Trail loop (specifically, the section shared with the Maple Loop and the same-length section west of that) more or less following the county line. The multi-purpose bike trail crosses the county line west of the nature center parking lot (see map) where it leaves the open meadow and enters the woods.

This 55-acre swamp Tucker State Nature Preserve in Blacklick Woods honors Walter A. Tucker, one of the founding directors of Metro Parks and one of the individuals who helped establish the state nature preserve system. It is designated a National Natural Landmark.

Blacklick Woods Metro Park is in eastern Franklin and northwestern Fairfield counties. The eBird Hotspots are designated by county.

Opened in 1948, Blacklick Woods is the oldest and one of the busiest Metro Parks. The forest areas of this 643-acre park are laced with trails that wind through a swamp forest with white oak, pin oak and white ash along with red maple, red elm, shagbark, butternut hickory and dogwood.

Shrubs include spicebush and buttonbush and the park features a small buttonbush swamp.

The 100-acre beech-maple forest is one of the least disturbed in Central Ohio. As you meander along the trails amid the beech and sugar maples, you might spy a fox sizing up a meadow vole or watch a white-tailed deer browsing before sundown.

Visitors can also enjoy wildlife from the open meadows and fields while picnicking at the park. Seasonal ponds host abundant aquatic and plant life.

Blacklick Creek flows south along the eastern boundary of the park. The park features more than six miles of trails for hiking, biking, and jogging. 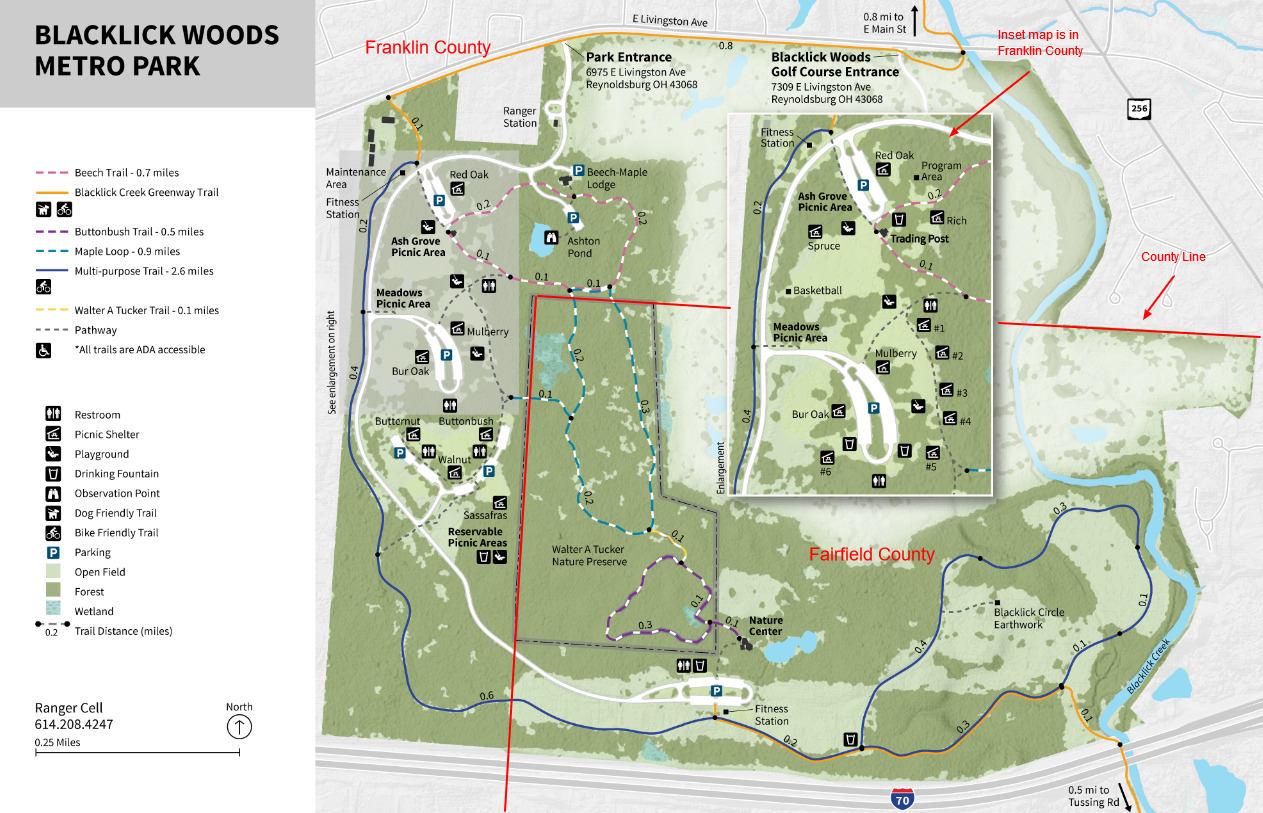