Also, see all the hotspots at:
Hancock County Birding Drive

Van Buren State Park lies in the rich agricultural plains of northwest Ohio. The plains, referred to as till plains, receive their name from the glacial debris, or till, which covers preglacial hills and valleys. The till plains are the result of the deposition and smoothing action of the glaciers. Most hills in these areas are mounds of boulders and soil left by the retreating Wisconsinan glacier.

Beneath the almost continuous cover of glacial deposits lies sedimentary bedrock which, in this region, is mostly limestone with a little shale. Much of this limestone is the magnesium-bearing form called dolomite.

The original vegetation of the area, before settlement, was mostly woodland. Today, much of the vegetation consists of farm crops such as corn, soybeans, and wheat. Locally, a small but valuable remnant of the original woodland remains. Beech and sugar maple occupy a large portion of the wooded area in Van Buren State Park. Mammals found in the area include red fox, red squirrel, white-tailed deer, raccoon, skunk, and opossum. Other animals found are the eastern garter snake, spring peeper, eastern bluebird, eastern meadowlark, cowbird, woodcock, and short-eared owl. Wildflowers abound in the fields and woodlands of the area. Dutchman’s breeches, spring beauty, thimbleweed, daisy fleabane, and chicory are commonly found around the park.

Van Buren State Park Trails
Twelve miles of multi-use trails traverse a variety of terrain through scenic woodlands and along river bottoms including a 2-mile interpretive nature trail with signage beginning at the family campground area and ending at the west end of the park.

A description with a map of a 2.7-mile hike using the trails at Van Buren State Park is on the AllTrails website. 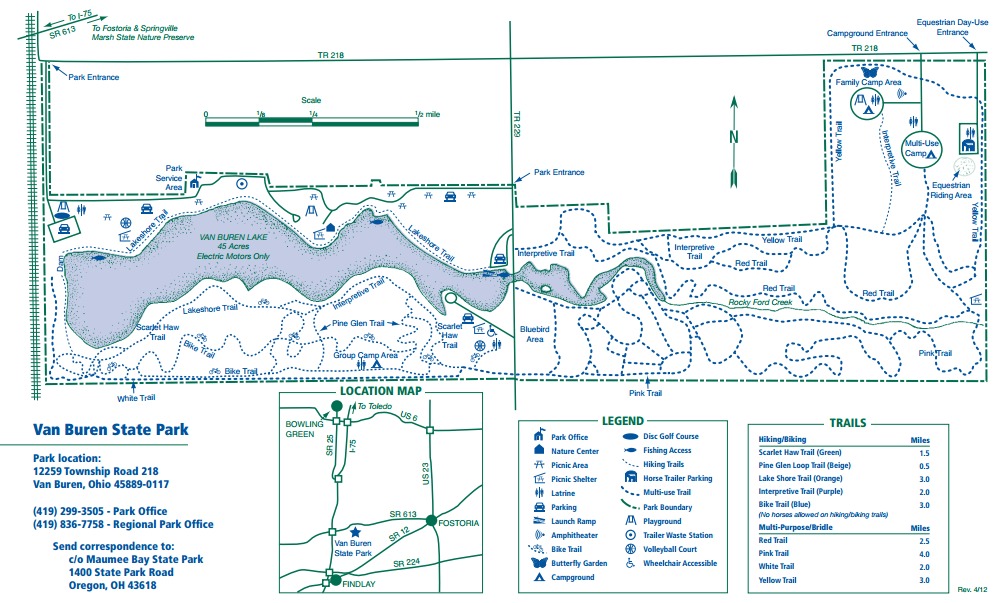