Also, see all the hotspots at:
Pickaway County Birding Drive

A. W. Marion State Park, located in Pickaway County on Hargus Lake, can attribute its natural wonders to glaciation that occurred more than 12,000 years ago. As glaciers advanced over more than two-thirds of Ohio, vast amounts of rock and soil (or till) were deposited over the landscape. This till had a direct effect on the natural vegetation that occurs at A. W. Marion. The surface of the park is fairly level and the soil very fertile.

The area is diverse with woodlands, plains, and prairie. Ohio’s prairies, products of an ancient dry climate, are really small versions of the most extensive grasslands in the western United States. This eastern portion extends into Ohio and is part of the prairie-forest border or tension zone. Within this zone, the grasslands increased in size during droughts, only to be reinvaded by forests during wet periods. Before settlement began, scrub oak barrens, dense thickets formed by this shrub, were common in the region but have since been cleared for raising crops.

The nearby floodplains of the Scioto River are adorned with a variety of wildflowers. Wildlife indigenous to the area includes fox squirrel, ring-necked pheasant, a variety of songbirds, red fox, and white-tailed deer.
From A. W. Marion State Park webpage

A description with a map of an 8.5-mile circuit hike of Hargus Lake is on the AllTrails website. 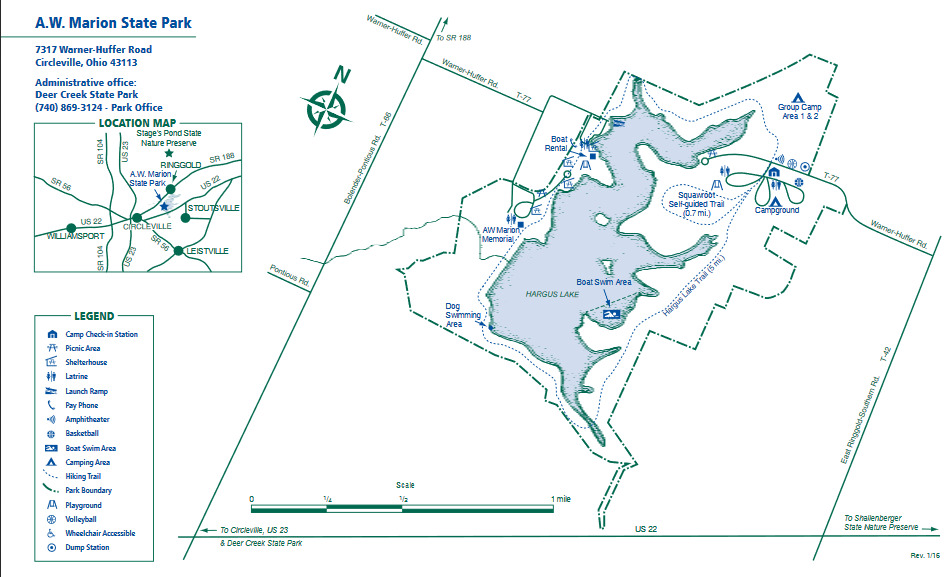