The picnic area, just to the left before crossing the (first) bridge, has a number of tall trees in which turkey vultures and, less frequently, bald eagles have been seen perched, as well as common species of smaller birds.

The area just over the bridge and to the left contains several boat ramps and a section of shore with a small pond surrounded by vegetation. Some waterfowl or herons are usually offshore and red-winged blackbirds are in the pond area in summer. Many swallow species frequent this and adjacent areas in season and cliff swallows have nested under the bridge.

Continue birding south of this section, south and west of the parking lot on the south side of Liebs Island Road. Killdeer are usually present in or around this parking lot. A track can be followed from the lot southwest along the channel to the south shore and then east paralleling the shore. Waterfowl and herons, as well as gulls, are often present off this shoreline. There is a small wooded area here and nearby a bench overlooking the water.

Buckeye Lake was the center of Milton Trautman’s 1922-1934 study of a 44-square-mile patch of east-central Ohio. His most important work was the monumental Birds of Buckeye Lake (1940, University of Michigan Press, Ann Arbor), which James L. Peters described as the most comprehensive study of the bird life of a limited area in the United States. This book is much more than its title promises. It offers not just the usual report on local birds but a detailed account of the natural history of a region from glacial times to the present.

Buckeye Lake State Park
At one time, the ground now known as Buckeye Lake was swampland resulting from glaciation. Thousands of years ago the glaciers moved south across Ohio altering drainage systems and landscapes. Natural lakes, known as kettles, were created when huge chunks of ice broke off the glacier and melted in depressions. Other lakes were formed when the glacier blocked existing water outlets. As time progressed, clay and silt settled out of the still water into the bottom of the lakes.

Today as we study the landscape, we can learn about the old lake locations by the nature of the underlying clay and silt. The large area of fine clay sediment in the Buckeye Lake region indicates that the glacial lake was broader than the presently constructed lake.

When whites began settling in Ohio, only a few of the ancient lakes remained. They were shallow and swampy, and more correctly classified as bogs or marshes. Explorer Christopher Gist, while traveling the Scioto-Beaver Trail just south of Buckeye Lake, camped by the watery bog’s edge. In 1751, he named the area Buffalo Lick or Great Swamp in his journal. The Great Swamp included two long narrow ponds that were joined during high water. A considerable part of the wetland was a cranberry-sphagnum bog. Cranberry Bog, a state nature preserve and a National Natural Landmark, is situated in Buckeye Lake. When the lake was impounded in 1826, Cranberry Bog broke loose from the bottom and became a floating island that may conceivably be the only one of its kind in the world. Most of the island is an open sphagnum moss meadow with an abundance of cranberries and pitcher plants making the area a naturalist’s delight. Access to the island is by permit only from the ODNR Division of Natural Areas and Preserves.

Buckeye Lake’s shoreline offers excellent habitat for waterfowl. Good bird-watching opportunities exist especially during the spring and fall migrations. One of the state’s largest great blue heron rookeries is situated on adjacent private land, but the birds can often be seen in the park.

The Lakeside Trail at Fairfield Beach and Brooks Park is a 4.1-mile multi-purpose, wheelchair accessible. paved path that offers shoreline views. You may enter the path at either the North Shore boat ramp or Lieb's Island. 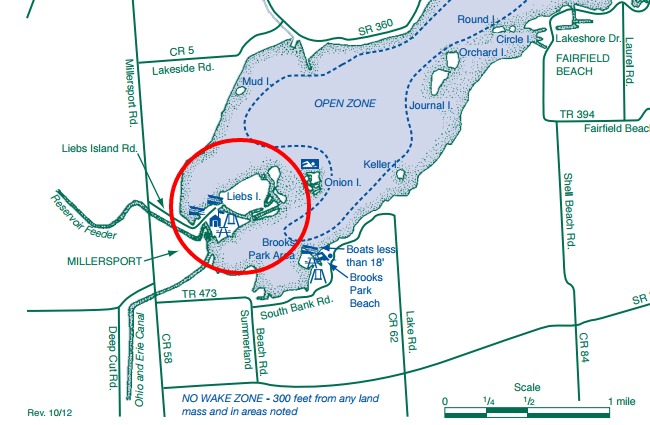 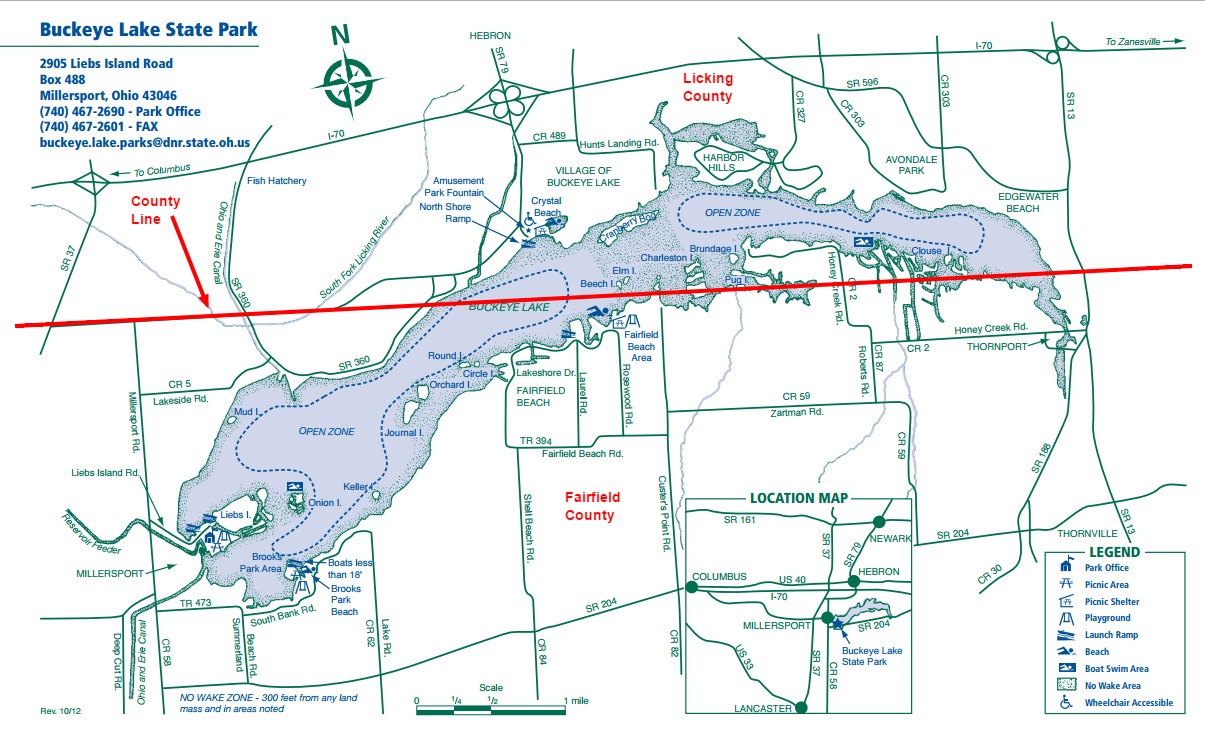