The west portion of Mary Jane Thurston State Park is in Henry County, including the North Turkeyfoot Area on the north side of the Maumee River and the Marina on the south side of the river. The east portion of the park is in Wood County, including the Camping Area and the Grand Rapids Towpath Trail. The Buckeye Trail passes through the park on the south side of the Maumee River. Birders who carefully keep bird records by county will want to be aware of the location of the county line when visiting this park.

Northwestern Ohio was covered by a massive ice sheet during the Ice Age. As the ice melted, the area from Fort Wayne, Indiana to western New York was covered by a large lake named Lake Maumee by geologists. With the retreating of the ice, new eastern outlets opened, and eventually, present-day Lake Erie was formed. As the water drained from the state, swamps formed in the lowlands. The Great Black Swamp, 120 miles long and 30 to 40 miles wide, included the Maumee Valley. The heavily wooded swamp was a barrier to westward settlement. By 1900, through the use of a major system of dikes and ditches, the area was drained. The dark soils of the old swamp became fertile agricultural lands.

This area was the rich hunting grounds of many Indian tribes. As settlers moved west, hostilities arose, President Washington appointed General Anthony Wayne to lead forces into the area. After building Fort Defiance in 1794, at the junction of the Maumee and Auglaize rivers, Wayne advanced down the Maumee Valley. At the Battle of Fallen Timbers, Wayne’s troops defeated the Indian warriors commanded by Blue Jacket. This battle put an end to twenty years of conflict between Indians and settlers.

In later years, the canal building era had a great influence on the region. The Miami and Erie Canal, which traveled north from Cincinnati, merged with the Wabash and Erie Canal south of Defiance in 1845, linking Cincinnati to Lake Erie. The canal stimulated development and trade along its route.

To better use the slackwater at the head of the Maumee River near the community of Gilead, a second dam was built by the state in 1845. Previously, a smaller dam had been built across part of the river to power a mill. The citizens were outraged about the new dam which limited water power to the mill and one night destroyed the dam. As a compromise, the Gilead Side Cut Canal was built, connecting Gilead with the Miami and Erie Canal, and a replacement dam was constructed. In 1855, the canal port of Gilead was incorporated as Grand Rapids.

In 1928, Mary Jane Thurston, a Grand Rapids schoolteacher bequeathed fourteen acres of land to be used as a park. After several transfers and leases, Mary Jane Thurston State Park was dedicated in 1968. Adjacent property and additional land upriver, known as North Turkeyfoot Area, were purchased in 1968 and 1969. 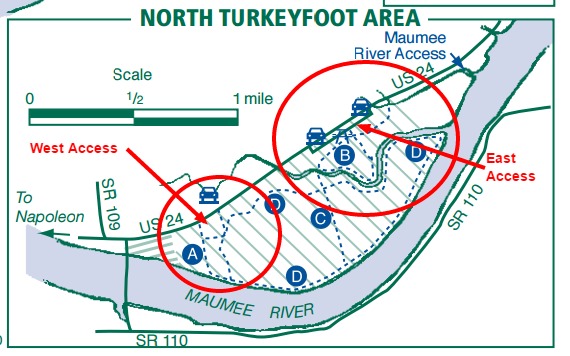