Entrance is from the paved Tealtown Road. The Barg Salt Run Road entrance is a gravel road at the boundary of the Wildwood Retreat Center.

Most trail junctions are marked with a stone or wooden markers, and trail maps with numbers corresponding to these markers are available next to the pay phones at the entrance outside the Rowe building. Most trails are paved with bark, but some are natural grass and can become muddy at times.

From Milford, US-50 East to Roundbottom Road in Perintown, turn right. Next available left is Tealtown Road. Proceed onto Tealtown to the Cincinnati Nature Center entrance .7 miles on the right.

The site is open dawn to dusk; the Rowe building (with gift shop, library, and other amenities) is open 9-5 M-Sat., and 1-5 on Sundays.

There is plenty of paved parking, and gravel parking is also available during overflow. Easter weekend sees the highest volume of visitors due to daffodils and wildflowers in bloom.

The Clermont County Convention and Visitor’s Bureau is located behind Applebee’s along Glen Este-Withamsville Road near its intersection with OH-32. You may be able to pick up a map of the county there. Traffic can be heavy at times, especially at this intersection. Use caution on Tealtown Road. Sometimes deer stand in the middle of the road as they are crossing. There is also a sharp turn or two on this road.

Winter
Northern Saw-whet Owls occur almost annually (November thru March) in the many red cedars throughout the property. However, it is best to go with a naturalist or CNC member to a known roosting owl, as one can get disoriented very easily in the cedar stands. Great Horned, Barred, and sometimes Eastern Screech-Owls can also be found roosting in the decidous or coniferous woodlands, sometimes not far from the parking lot. Northern Harriers have been seen in the fields on Lookout Trail. All seven species of woodpeckers can be found here in winter, although Red-headed can be very tough to find and may be absent in some years. Winter Wrens are sometimes found along Avey’s Run. Both kinglets can be found here, especially in the cedar stands while searching for saw-whets. Eastern Bluebirds have been helped along by numerous bluebird boxes, and can readily be found along woodland edges adjacent to fields where these boxes are placed. Pine Warblers are sometimes found in the Douglas Firs behind the Rowe building, and during irruption years Red-breasted Nuthatches and Pine Siskins can be found at and around the feeders here. Rare winter visitors have included Long-eared Owl, Purple Finch, Evening Grosbeak (1980s), Rose-breasted Grosbeak, Common Redpoll, Cape May Warbler, Common Yellowthroat, and Indigo Bunting.
Spring
The attraction here during spring migration is the warblers (I have seen 35 species here), thrushes (all 5 species), tanagers, and orioles. Some of the more sought-after species seen here include Gray-cheeked Thrush (Wildflower trail) and Veery (Wildflower and Woodland trails), Blue-headed and Philadelphia Vireos (trees adjacent to driveway and Woodland trail) and the following warblers: Golden-winged, Orange-crowned, Northern Parula (has nested in firs behind Rowe bldg.), Cape May (check the spruces in the parking lot), Black-throated Blue, Yellow-throated, Pine, Prairie, Cerulean, Prothonotary (nests in boxes in Crosley Lake), Worm-eating (hard to find, but check Fox Rock overlook and the Far Ridge trailhead), Northern Waterthrush, Connecticut Warbler (I have consistently found singing males around May 15th along the all-person’s trail between the Crop Fields and Wildflower trail), Mourning (along Herb Wall), Hooded (Wildflower, Woodland, and Far Ridge trails), Wilson’s (thickets between all-person’s trail and reservoir pond), Canada (Far Ridge and Woodland trailheads), Yellow-breasted Chat (Lookout trail). In addition to these goodies, “Brewster’s” and “Lawrence’s” Warblers have both been found here. Another popular attraction is participation in an annual woodcock watch. American Woodcocks frequently display in early spring over the open fields. Organized events for this show are planned annually. Golden-crowned Kinglets sometimes gather in large flocks of up to 30 birds in mid April. Although Henslow’s Sparrows were once frequently found on Lookout trail in the 1980s, they have become increasingly harder to find here, and I haven’t seen them here in recent years. However, Lincoln’s Sparrows can be found on Lookout trail in the thickets and old fencerows. I once saw a Savannah Sparrow at the Rowe building feeders. Other specialties include Broad-winged and Red-shouldered Hawks and both cuckoos. Although Common Nighthawks are known for their spectacular August and September migration, my highest counts here were not in the fall but in the spring with 74 birds on 05/21/1989. Some species for which few records exist include Yellow-crowned Night-Heron (I had a fly-over in the parking lot on 05/07/1996), Common Merganser, Whimbrel (04/12/1991), Olive-sided Flycatcher and Yellow-bellied Flycatcher.
Summer
Nesting species include Cooper’s, Red-shouldered, Broad-winged and Red-tailed Hawks, American Kestrel, Northern Bobwhite (harder to find than it once was but probably still present), Spotted Sandpiper, American Woodcock, both cuckoos, Eastern Screech-, Barred (young Barred Owls can usually be found along Fox Rock trail) and Great Horned Owls (young typically fledge by late March to mid April and nests are frequently encountered not far from the trails), Ruby-throated Hummingbird, Pileated Woodpecker, Eastern Wood-Pewee, Acadian Flycatcher (Avey’s Run), Eastern Phoebe (nests annually on a light fixture on the porch side of Rowe building), Great Crested Flycatcher, Eastern Kingbird, vireos (White-eyed, Yellow-throated, Warbling, and Red-eyed), Purple Martin, Tree, Northern. Rough-winged and Barn Swallows, White-breasted. Nuthatch, Carolina and House Wrens, Blue-gray Gnatcatcher (several nests can be found in a single season), Eastern Bluebird (numerous bluebird boxes erected), Wood Thrush, all three mimic thrushes, Cedar Waxwing, warblers (Blue-winged, Northern Parula, Yellow, Yellow-throated, Prairie, Cerulean, Prothonotary [rare], Worm-eating [rare], Ovenbird, Louisiana Waterthrush, Kentucky [declining?], Common Yellowthroat, Hooded, and Yellow-breasted Chat), both tanagers, Eastern Towhee, sparrows (Chipping, Field, Song, Henslow’s [extirpated from CNC?]), Rose-breasted Grosbeak, Indigo Bunting, Eastern Meadowlark and both orioles.
Fall
This season brings another wave of warblers. The most frequent fall species include Tennessee, Nashville, Bay-breasted, Yellow-rumped, American Redstart, and Black-throated Green, with lesser numbers of Black-and-white, Cape May, Magnolia, Chestnut-sided, Palm, Blackpoll, and Ovenbird. A few Orange-crowned are found each fall, and sometimes Mourning and Connecticut, although quite infrequently. All five thrushes have been found in the fall, and six species of vireos are usually found. Fall is a great time to look for sparrows, especially in September. Open fields with tall grasses, such as Lookout trail and the Crop Fields, can often yield Field, Song, Swamp, and White-throated. Others found with less frequency in fall include Chipping, Savannah, Fox, Lincoln’s, and White-crowned. Toward the end of the fall season one may begin to expect some winter visitors such as White-throated Sparrow, Brown Creeper, Golden-crowned Kinglet, and Yellow-bellied Sapsucker.

The Cincinnati Nature Center offers two locations in Clermont County, east of Cincinnati, for visitors to hike and explore.

Located in the Eastgate area, just east of Milford, Rowe Woods consists of 1,025 acres of fields, forest, ponds, and streams. This original Cincinnati Nature Center site boasts more than 16 miles of hiking trails for visitors to explore and enjoy. Educational programs for people of all ages take place in our outdoor classroom, teaching the interdependence and diversity of the natural environment. Visitors can easily spend an hour, a day, or all four seasons exploring what Rowe Woods has to offer.

Long Branch Farm is open to the public during programs and events only. Long Branch Farm trails are open to members only. A gift from Neil and Camilla McElroy in 1973, this 582-acre plot of agricultural and natural land is an invaluable teaching tool located in Goshen Township, nine miles northeast of Milford. Within its scenic pastures, meadows, woodlands, and crop fields, the ecology of sustainable agriculture is nurtured and the heritage of this vulnerable land is preserved. Four miles of hiking trails wind through this unspoiled and peaceful area near Goshen. Hiking trails are open to CNC members daily. 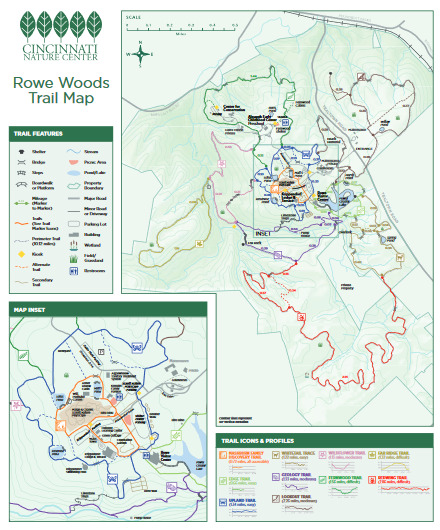 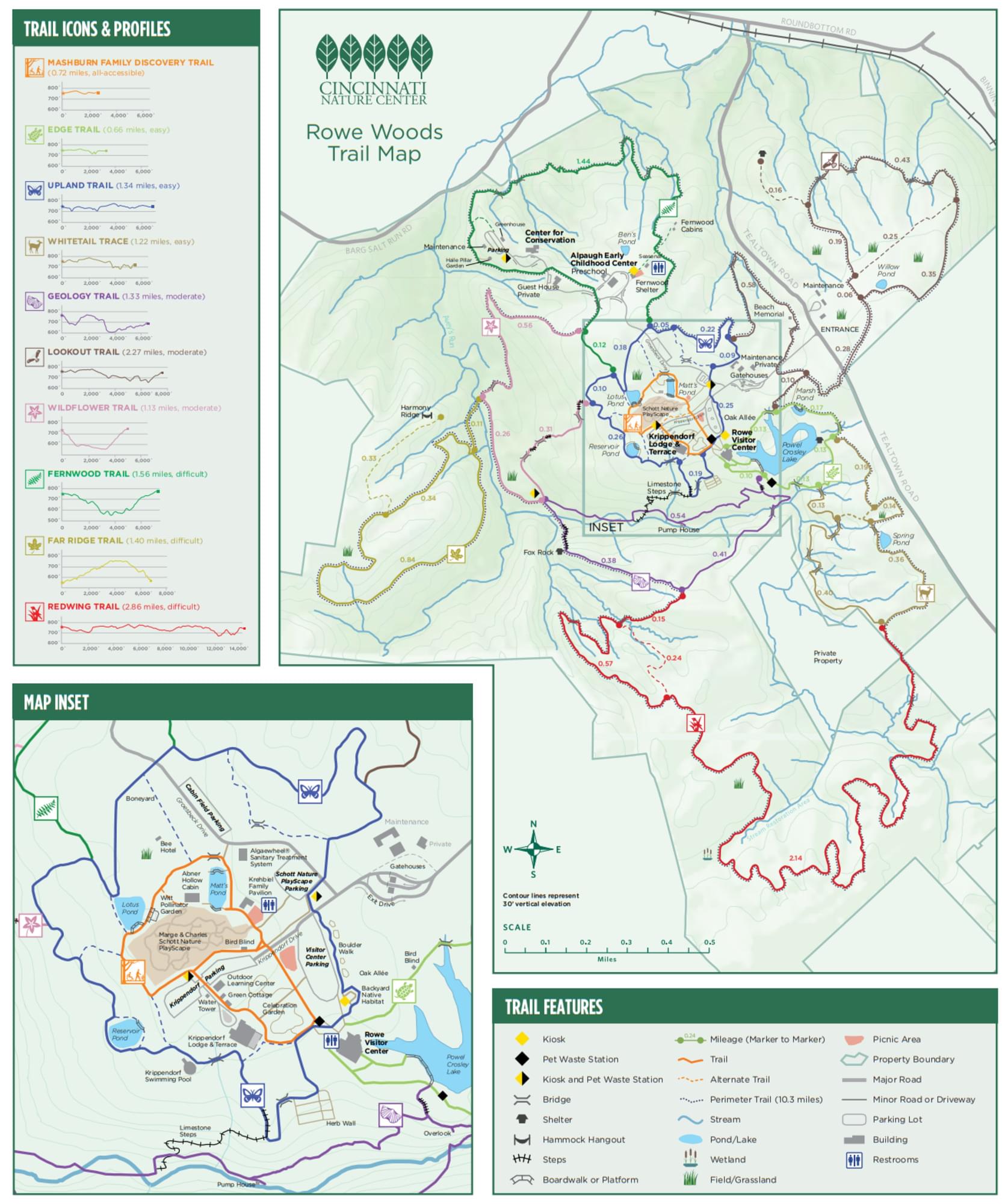