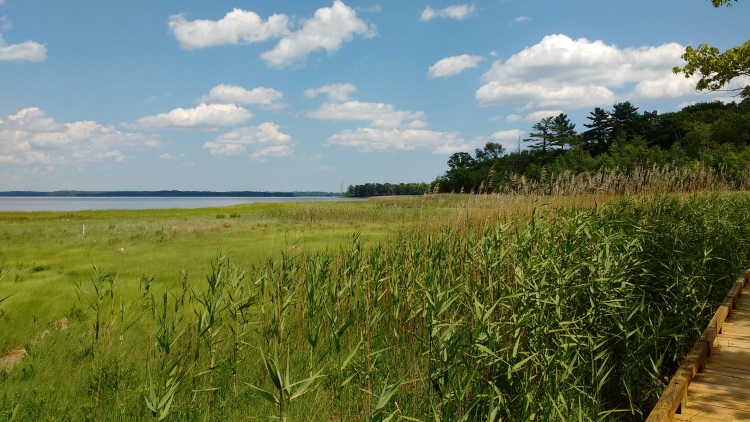 Also, see all the hotspots at:
Great Bay

Sandy Point is the geographic location of an educational facility (the Great Bay Discovery Center, headquarters of Great Bay National Estuarine Research Reserve), and has a boat launch that serves as a good location for scanning the bay. It is accessed by taking Depot Road north from NH-33 a few hundred yards East of the intersection with Squamscott Road. Follow Depot Road to the end and take a left at the “T” intersection. Cross the railroad tracks and you will see the discovery center on your left and a track down to the boat launch forking off to the right.

Waterfowl, Bald Eagle, shorebirds, and a few gulls are among the species you might see scanning the bay. While the duck concentrations tend to remain further out or to the east in the bay, hunting pressure or ice conditions may drive them close to the boat launch (a scope is very helpful!). Rarer species are always worth looking for. The trails around the visitor’s center sometimes have southern species like Eastern Screech-Owl, Red-bellied Woodpecker, and Carolina Wren.

In 1993, the Great Bay Discovery Center (formerly known as Sandy Point) was constructed on the shores of Great Bay. Located in Greenland, NH, it serves as the education headquarters of the Great Bay National Estuarine Research Reserve.

Inside the Discovery Center, visitors are treated to interpretive exhibits about the Great Bay Estuary and the amazing creatures that call it home. Children can get their hands wet in an estuarine touch tank as they learn about lobsters, horseshoe crabs, mud snails, and more! Interactive displays about salt marsh farming, salmon migration, plankton, tides, and research on the Bay, allow children and adults alike to learn about the Estuary.

Great Bay is a tidal estuary located in Strafford and Rockingham counties in eastern New Hampshire, United States. The bay occupies over 6,000 acres, not including its several tidal river tributaries. Its outlet is at Hilton Point in Dover, New Hampshire, where waters from the bay flow into the Piscataqua River, thence proceeding southeast to the Atlantic Ocean near Portsmouth. The northern end of the bay, near its outlet, is referred to as Little Bay.

Located within the Gulf of Maine watershed, the Great Bay Estuary is a drowned river valley composed of high-energy tidal waters, deep channels, and fringing mudflats. The entire estuary extends inland from the mouth of the Piscataqua River between Kittery, Maine, and New Castle, New Hampshire through Little Bay into Great Bay proper at Furber Strait, a distance of 12 miles. The Great Bay Estuary is a tidally-dominated system and is the drainage confluence of three major rivers, the Lamprey, Squamscott, and Winnicut. Four additional rivers flow into the system between Furber Strait and the open coast: the Cocheco, Salmon Falls, Bellamy, and Oyster rivers.

The Piscataqua River is an ocean-dominated system extending from the Gulf of Maine at Portsmouth Harbor and forming the border of New Hampshire and Maine to the fork of its tributaries, the Salmon Falls and Cocheco rivers. These rivers, several small creeks, and their tributaries and ocean water from the Gulf of Maine create the Great Bay estuarine hydro system. The tidal range is dramatic within Great Bay. The average depth of the embayment is 8.9 feet with channels extending to 58 feet. The water surface of Great Bay covers 8.9 square miles at high tide and 4.2 square miles at low tide, leaving greater than 50% of the bay exposed at low tide. 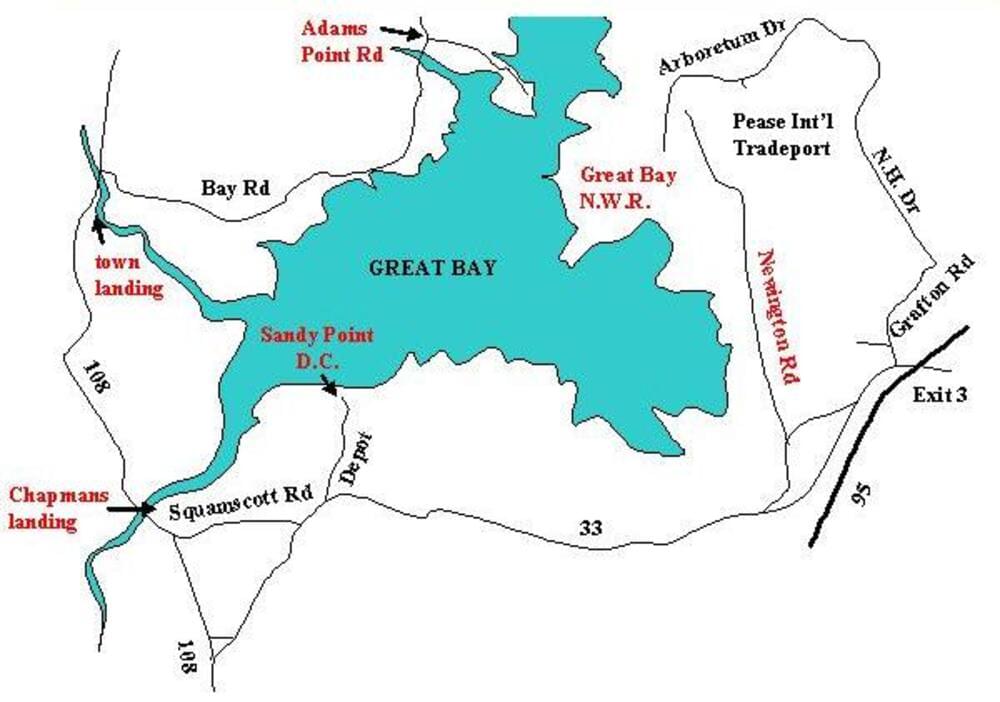