Resthaven Wildlife Area sits atop a former marl bog where the marl was stripped off for commercial purposes in the early part of the 20th century. The remaining substrate is thin and poor in nutrients. The subsequent vegetation cover is a mix of grassland, old-field, wetlands, and young swamp forest. This provides for a variety of songbird species, both in migration and during the winter and summer months. The wetlands are too shallow to accommodate most waterfowl species but do attract Bald Eagles and Osprey on a regular basis.

Resthaven is bounded to the north by OH-6 (only two miles from Willow Point Wildlife Area) and Whitmore Road, to the south. The Erie-Sandusky county line road forms the western border while OH-269 forms the eastern border. Several east-west roads permit access to much of the wildlife area. The two main east-west roads are Oxbo and Heywood. Oxbo passes through mostly grasslands and old fields while Heywood accesses several large expanses of water. Walking trails abound throughout the wildlife area allowing access to several more wetlands.

Located in Erie and Sandusky counties, Resthaven Wildlife Area is about 3-4 miles southwest of Sandusky. Traveling on OH-2, from the east or west, take the OH-269 SOUTH exit (near the east end of the Sandusky Bay Bridge). In about 2 miles, take a right onto OH-6. In less than a mile, turn left at the sign for Castalia. Continue beyond the Castalia Fish Hatchery (entrance to the left), and look for Resthaven Wildlife Area signs along the right (west) side of the roadway.

Open all year during daylight hours. Be aware that this is a very popular hunting area each fall and winter. In winter, only 1 January (the date of the local Christmas Bird Count) is a safe bet for birding.

There are numerous pull-offs along Heywood and Oxbo Roads.

Resthaven Wildlife Area is a stop on the Lake Erie Birding Trail.

Winter
Resthaven is a place of winter songbird diversity in the northwest. Half-hardy species in the region such as Eastern Towhee, Yellow-rumped Warbler, and Brown Creeper are regular here. The Carolina Wren remains in high densities, while the sparrow populations along Oxbo Road are of particular note. White-throated and Song Sparrows are numerous, while White-crowned Sparrow is a regular here. This is one of the more reliable sites for mid-winter Field and Fox Sparrows. Rarities in January along this road in recent years have included Indigo Bunting and Gray Catbird. Hedge rows along SR 269 routinely accommodate flocks of American Robin (up to 1000) in December and both Cedar Waxing and Eastern Bluebird are regulars.
Spring
Warbler fallouts occur here much as they do at more famous lakeshore locales, but viewing may not be optimal and the birds are more spread out. Still, one can be rewarded by significant concentrations in early May. The old-field species, in particular, may be more readily detected here than at lake-front sites (e.g. the Blue-winged Warbler which is a rare local breeder). Orchard Orioles, Yellow-breasted Chats, and Empidonax flycatchers are perhaps more readily found here than at lakefront sites in the northwest, including the well-known Magee Marsh. Watch for the Prothonotary Warbler along Heywood Road where it is a rare visitor in May. Sora and Virginia rails are scarce, but regular visitors as are both bittern species. Walk the road back from the headquarters building. The cattail marshes of this area have been succeeded by the invasive phragmites in recent years and the numbers of many wetland birds, including the resident Marsh Wren, have dwindled.
Summer
First discovered in 2001, the Osprey is now a nesting species of the area and is regularly seen from the north side of Heywood Road. As of 2003, this was the only Osprey nesting site in the Western Basin of Lake Erie. Old fields of the area should be checked, especially the old railroad bed that runs parallel to Oxbo Road. (Access here is to the south, from a driveway halfway along Oxbo road). The very rare (for Ohio) Bell’s Vireo has been recorded on territory here on more than one occasion. Another southern songbird possibility here is the Blue Grosbeak which has appeared twice in immediately surrounding lands. The White-eyed Vireo and the Northern Mockingbird are two more southern species that have become regular here in recent years.
Fall
Resthaven Wildlife Area is a significant staging site for Northern Rough-winged Swallows in August. Otherwise, comparatively little is known of the fall migration at Resthaven Wildlife Area.

The Resthaven Wildlife Area is at the northern edge of Castalia on the west side of OH-269. Totaling 2,272 acres, the area includes 444 acres of water. Most of the land is in woodland and has shrubby cover. Approximately 90 acres are in crop rotation. Sixteen percent of the land is grassland. More than half the area had been strip-mined for marl (a deposit of calcium carbonate or dolomite) prior to purchase by the Division of Wildlife. This mining left a very rough surface which has reverted to woody vegetation and cattails.

Resthaven Wildlife Area lies centered in what was originally a wet marl prairie, known by the early settlers as the “Castalia Prairie.” Early accounts record an extensive wet prairie reaching from the present city of Sandusky to Port Clinton. These accounts relate that the grass grew up to seven feet tall and was so thick as to make progress almost impossible.

Land purchase by the state of Ohio began in 1942. The overall objective is to provide public hunting and fishing by managing for species best suited to the land capabilities of the area. The area will be maintained in diversified cover types consisting of cropland interspersed among areas of permanent grass and low shrubs. Present woodlots will be maintained. 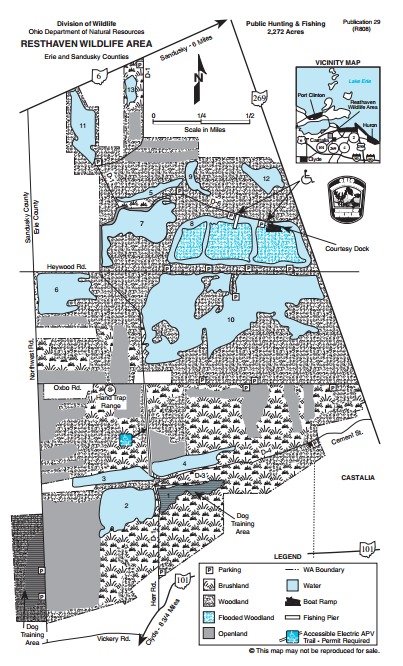