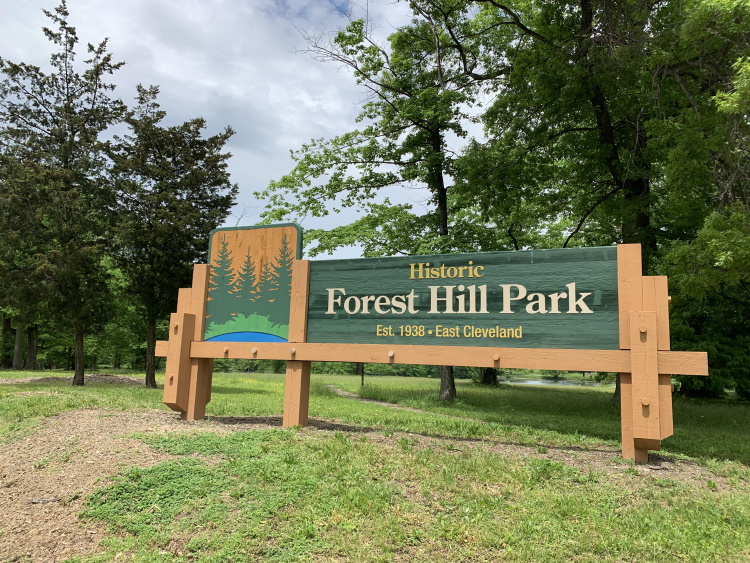 Also, see all the hotspots at:
Forest Hill Park

The other parking lot is located at Lee and Forest Hill Roads and is close to the tennis courts and the double picnic shelter.

The large play unit is for ages 5-12, with a sandbox is next to the picnic shelter, and a set of swings.

Once you explore Forest Hill Park, you’ll understand what John D. Rockefeller loved about this hilltop setting overlooking Cleveland. Stand on the site of the former Rockefeller home and you’ll even catch a glimpse of Lake Erie in the distance.

Forest Hill park is a 235-acre oasis located on the edge of the Appalachian Mountain foothills in East Cleveland and Cleveland Heights, OH. Overall, the park is about 40 percent forest and 45 percent meadow. The remainder has been developed for recreational activities.

The park is home to a variety of wildlife, including deer, coyote, fox, birds, geese and, until recently, a swan made itself at home in the pond at the Historic Boathouse.

Walk across the meadow and through the wooded trails to catch a glimpse of the many wildflowers and other flora and fauna native to this area. Forest Hill Park was listed in the National Register of Historic Places in 1998.

Forest Hill Park, located west of Lee Road and south of Euclid Avenue on Cleveland’s east side, was originally part of the estate of John D. Rockefeller. Purchased by Rockefeller in 1873, the high sloping land topped by a plateau was developed as a private country estate including trees, lawns, gravel roads, bridle trails, several lakes, and even a race track and 9-hole golf course. Bridges built from stone from the quarry on the property were constructed over the north and south branches of Dugway Creek. The property was used by the family as a summer estate until 1915; the 4-story residence itself burned to the ground in Dec. 1917. Between 1900-36, Rockefeller donated property in order to widen the bordering streets, Terrace Road and Forest Hill Boulevard. In 1939 John D. Rockefeller, Jr., transferred the property to Cleveland Heights (one-third) and East Cleveland (two-thirds), with the stipulation that the land is used and developed for recreational purposes. Opened in 1942, Forest Hill Park occupies what was once the heart of the original estate. Subsequently, the park was improved, with a swimming pool, basketball courts, fields for football and baseball diamonds, tennis courts, and picnic areas. 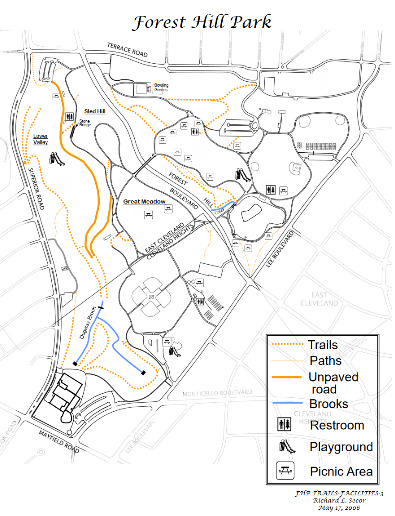