Also, see all the hotspots at:
Cuyahoga Valley National Park

In the spring, summer, and fall, the trees and bushes near the train station should be checked for Warbling Vireos, Baltimore Orioles, Brown Thrashers, Gray Catbirds, and other species. A short walk to the pedestrian bridge over the Cuyahoga River can yield Belted Kingfishers and Great Blue Herons. On the other side of the pedestrian bridge is the Lock 39 Trailhead for the Towpath Trail that follows the old canal.

There is a wetland located just to the west of the train station and railroad tracks. It can be accessed by walking a dirt and gravel road from the parking lot. Various waterfowl can be seen during the migration seasons in the pond.

In the spring, summer, and fall, birds like Green Herons, Sora, and Red-winged Blackbirds are found in the wetland. Birders should also watch for Red-Tailed Hawks, Turkey Vultures, Swamp Sparrows, American Goldfinches, Indigo Buntings, Eastern Bluebirds, Common Yellowthroats, Yellow Warblers, and Song Sparrows in the areas surrounding the wetlands. Bald Eagles and the occasional Peregrine Falcon have been known to fly over.

Take a ride on this scenic railway through the Cuyahoga Valley National Park, along the Cuyahoga River and the Canalway. Choose from a variety of different excursions and special events.

The railroad tracks in the Cuyahoga Valley National Park are closed to entry Do not walk on the railroad right of way. 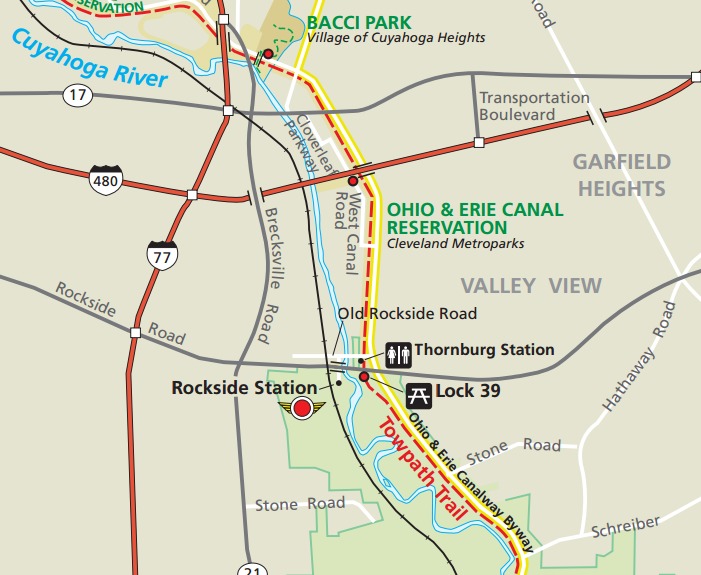