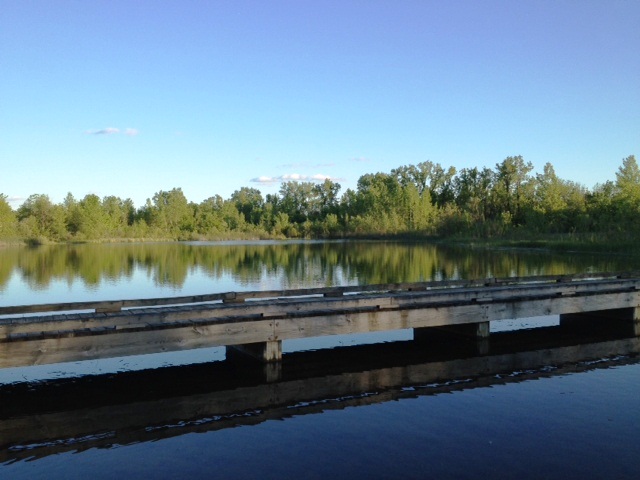 A parking lot and picnic tables are available at the Post Road entrance. The Reserve is 90 acres and managed by the City of Dublin.

Features include restored wetland and vernal pools; biking and walking paths; mature trees and woodland areas; ponds of varying sizes; a Tree Arboretum; a Sensory Garden; Wildflower and Prairie grasslands; Riparian Wildlife Corridor; the historic Fleming log cabin; and nest boxes. South Fork Indian Run, a tributary of the Scioto River, also flows through this Reserve. A vernal pool boardwalk is adjacent to Karrer Pond and Karrer Middle School. Karrer Pond is a stocked fishing pond and has a boardwalk and deck for picnicking, fishing, or observation.

The Reserve was named for “Red” Trabue, a Dublin naturalist, journalist, and television pioneer. Formerly a columnist for the Columbus Dispatch, Trabue also served as host for “The Outdoor Show,” one of the longest-running locally produced TV shows in Columbus Ohio history. It ran for 16 years from the 1950s to the early 1970s.

The nest boxes around the perimeter of Karrer Pond attract many tree swallows. Look for waterfowl in or near ponds and marshy areas. Woodpeckers and cavity-nesting species can be seen and heard in woodland areas and near nest boxes. Various raptors, vultures, waterfowl, and other species can be spotted flying between open areas or among shrubs and brush along the walking trails.