Also, see all the hotspots at:
Preble County Birding Drive

Rush Run Wildlife Area is located in southwest Ohio, 14 miles northwest of Middletown near the village of Somerville. Approximately half the area is in woods, mostly on the steep hillsides of Rush Run Creek Valley. The remainder is divided equally between open land consisting of cropland and permanent meadow and reverting fields with a mixture of grass and shrubs. This type of cover occurs mostly on the gently rolling uplands.

Rush Run Creek is an intermittent stream, named for its rapid water flow. In a four-mile stretch, it descends 300 feet. A 54-acre lake is located on the headwaters of this stream.

Purchasing of land for this wildlife area began in 1955. Management work has included the planting of conifers, protection, and improvement of existing woodlands, selection of areas to be returned to woodland through natural succession, planting of prairie grasses, and maintenance of open fields. Rush Run Lake was constructed in 1970.

Largemouth bass, bluegill, crappies, and channel catfish are the principal fish species in the lake.

Many kinds of nesting and migrant birds utilize the area. Large numbers of waterfowl and songbirds migrate through in spring and fall, and many hawks stop over during the fall migration. A variety of songbirds can be found all year. Bird watching is a prime form of recreation and enjoyment for many visitors. 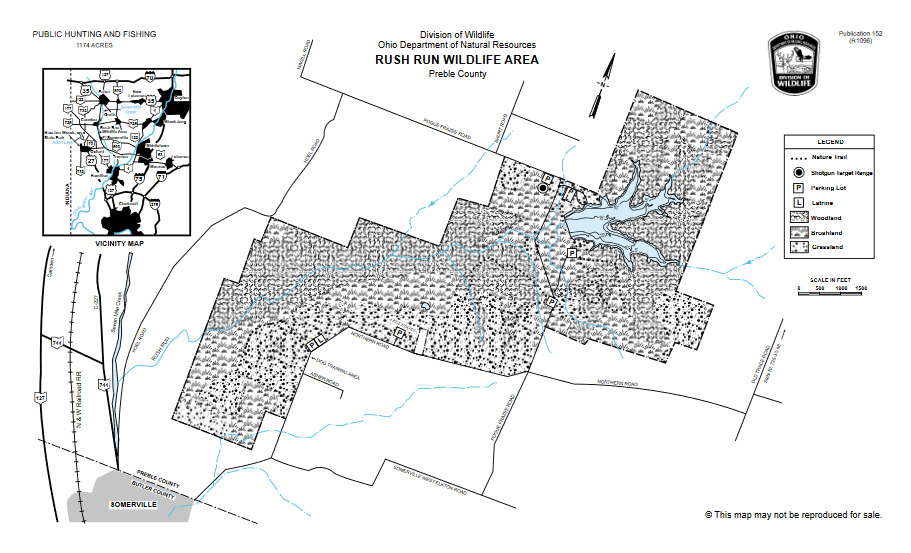