In spring 2016 there were four Glossy Ibis seen here for several days. Whip-poor-will, Ruffed Grouse, and an occasional Black Vulture are seen here. To the south, nearby, across the county line, are nesting Common Ravens, a hopeful future find for the Appalachian hills of Columbiana County. Ruffed grouse and wild turkey are common. Woodcock and waterfowl frequent the area.

The 2,265-acre Highlandtown Wildlife Area lies 8 miles south of Lisbon and 3 miles northeast of Salineville in southern Columbiana County. It can be reached by OH-164 from Lisbon and OH-39 from Salineville and Wellsville.

The terrain is steeply rolling, with some flat hilltops and valley floors. Elevations vary from 1,060 to 1,340 feet above sea level. Highlandtown Lake, 170 acres in size, is on the upper headwaters of Little Yellow Creek. Second-growth hardwoods and conifers which cover most of the area are interspersed with brushy coverts, former crop fields, and some meadow and grain crops.

The purchase of land for this wildlife area began in 1956. Additional land was acquired as funds became available until the area reached its present size. Highlandtown Lake was completed in 1966.

Game management activities include the planting of shrubs and conifers, protection and improvement of existing woodland, selection of areas that will be allowed to return to woodland through natural succession, and management of existing open fields based upon land capability. Crop rotations and contour strip cropping patterns have been developed to improve food and cover conditions for wildlife.

Cottontail rabbits and squirrels, both fox and gray, are the principal game species. 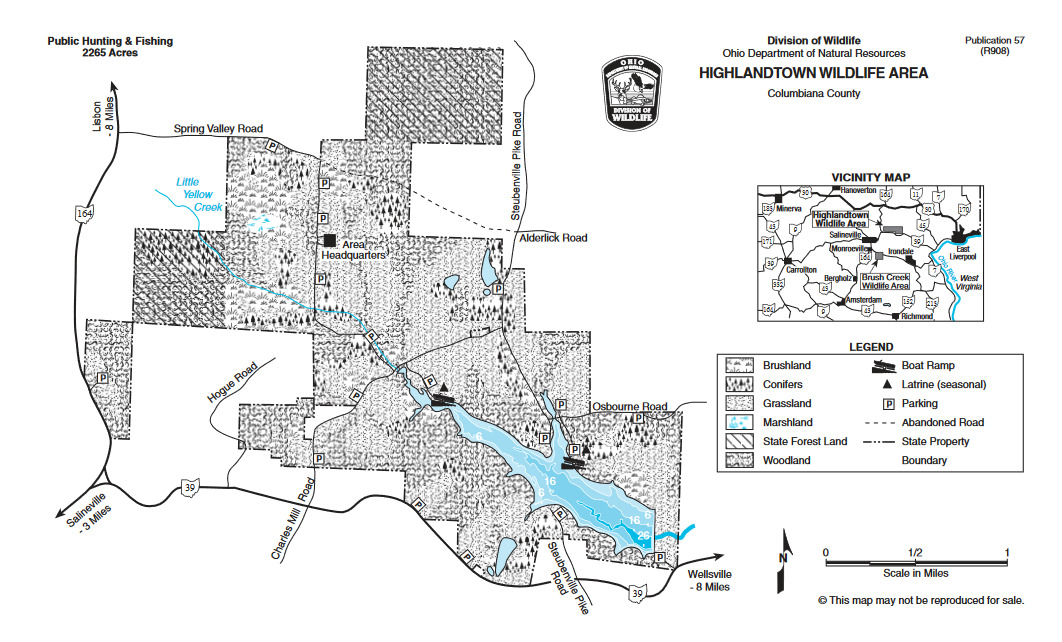