Shaker Lakes are a stop on the Lake Erie Birding Trail.

Birding is great at Shaker Lakes, stop 23 on the Ohio Lake Erie Birding Trail. It is very accessible all around the two bigger lakes and, though it is in a residential area, there are plenty of very comfortable access point throughout the entire Shaker Lakes Park system. There are also free parking areas. The All People’s Trail (APT) at the Nature Center loops through the marsh and over the wooded Doan Brook. This time of year sparrows are abundant in the newly restored marsh and the woodland understory. During spring and fall migration warblers are plentiful. Lower Lake is accessible via connecting trails from the All People’s Trail at the Nature Center. You can walk around the entire lake with ease and there are trails that weave down along the shore. Sometimes they are muddy and typically more rugged. Road level paths are generally paved. There are no homes on the shore of Lower Lake. The Doan Brook Gorge beyond Lower Lake has dirt paths and there are no homes for the majority of the stretch.

The Nature Center at Shaker Lakes was founded in 1966 as the result of a grassroots community effort to preserve the Shaker Parklands from becoming the route for a new freeway connecting Cleveland’s East Side to downtown.

The parklands had been designated in the late 19th century as a natural green space, set aside by the city of Cleveland for the benefit of its fast-growing population. Citizens used the park as an escape to the “country” as the industrial city pushed eastward and as the land that had been farmed by the North Union Shaker community began to be transformed into the new suburban communities of the Heights. City and suburban residents found that they could enjoy the area along the Doan Brook, from Warrensville Center Road through Rockefeller Park to Lake Erie, and stay in touch with the natural world.

That setting was threatened in the mid-1960s by the proposed Clark-Lee freeway, which would have cut through and over the Shaker Lakes section. Citizens organized to fight the freeway through a number of strategies, including the establishment of a Nature Center. Thus the Nature Center stands today. Its goals have remained consistent, yet simple: to teach environmental education and to preserve the area’s important natural habitats ~ lake, stream, marsh, field, ravine, and forest. 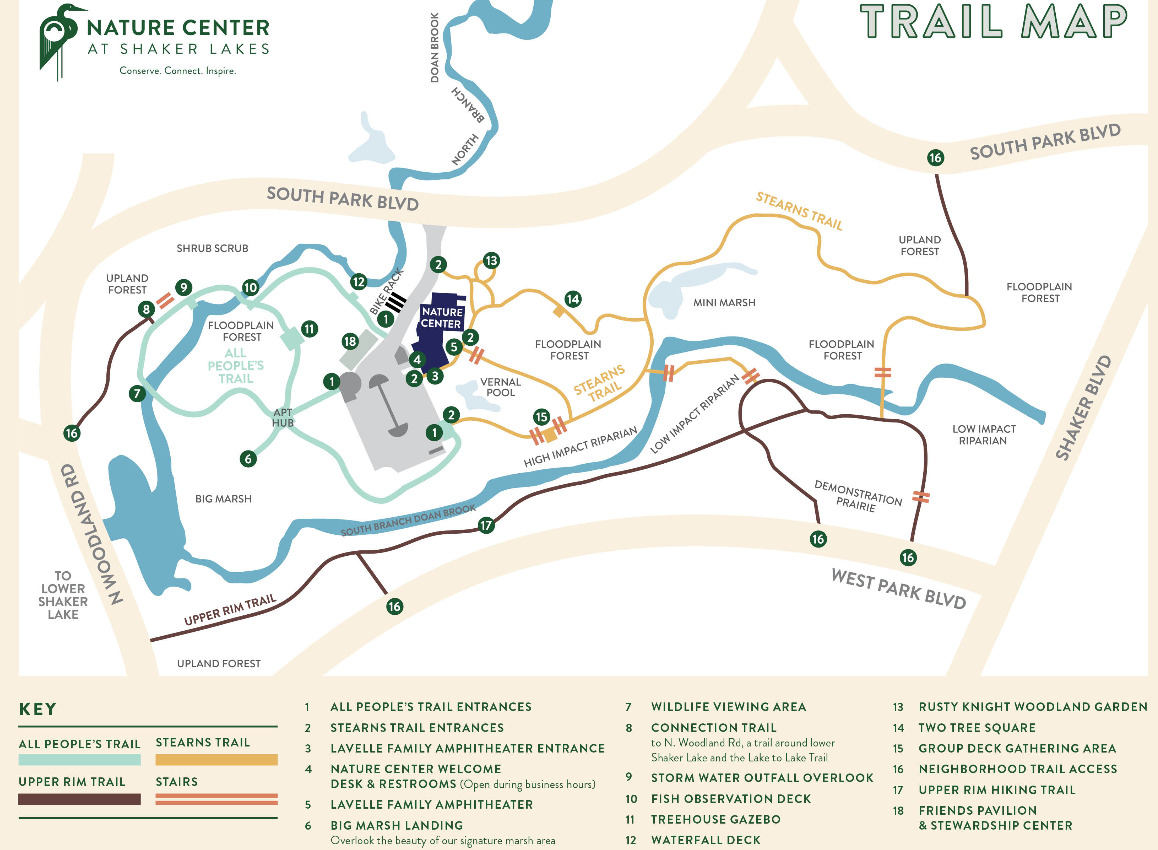