The 720-acre New Lyme Wildlife Area is situated in northeast Ohio, central Ashtabula County, New Lyme Township, two miles east of the town of South New Lyme. Brownville Road dead ends at the western parking lot of New Lyme Wildlife Area. Northern access to New Lyme is two miles east of OH-46 on Dodgeville Road. The area topography is flat and natural drainage is poorly developed to non-existent. Seventy percent of the area is wooded; the most common species are ash, maple, swamp white oak, pin oak, and red oak. Index of Ohio’s trees from the Division of Forestry. A 54-acre lake was constructed in 1990.

Purchased in 1942, the New Lyme Wildlife Area was used as an experimental ruffed grouse refuge. It was also used to raise snowshoe hares in the ’50s. New Lyme was opened to hunting in 1945 and was known then, as it is now, for its fine grouse, deer, squirrel, and woodcock hunting.

The fox squirrel is the most abundant game species. Other principal species are white-tailed deer, ruffed grouse, wild turkey, raccoon, and small numbers of cottontail rabbits, beaver and fur-bearing animals such as mink, skunks, opossum, and muskrat. During waterfowl migration, species found on the area are the wood duck, mallard, scaup, ring-necked duck, and Canada goose. A great variety of both nesting and migrant birds may be found on the area. The 54-acre lake has been stocked with largemouth bass, bluegills, and channel catfish. 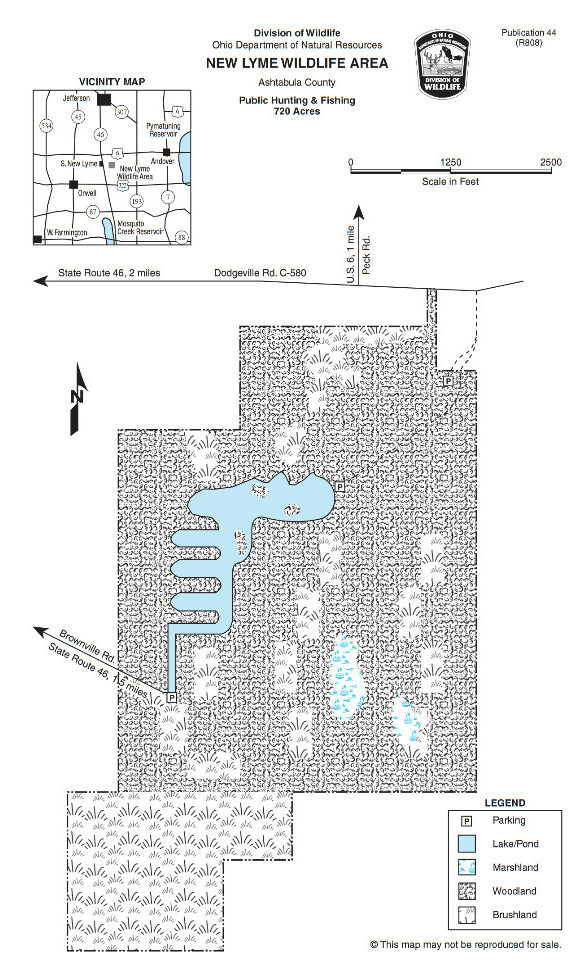