Carlisle is the largest of the Lorain County Metro Parks, encompassing 1,917 acres when included with Forest Hills Golf Course which lies at the northeastern end. Carlisle Reservation also offers a large variety of events and activities throughout the year and is home to the administrative offices for the entire park system.

Along with being the largest reservation in the Lorain County park system, Carlisle also has the most diverse natural habitat, including wetland, field, scrub/shrub, prairie, and forest. Much of this variety is due to its location along the transitional area between the great eastern forest, which once ran to the east coast, and the great western prairies, which spread out to the Rocky Mountains.

The west branch of the Black River flows through the park and has created extensive wetlands and bottomlands along both its present and former paths, dominated by box elder, willow, walnut, sycamore, and cottonwood. On higher and drier ground, Carlisle’s forests include combinations of ash, elm, sugar maple, beech, red oak, basswood, tulip, and hickory.

Some notable species in the area include pumpkin ash, butternut, closed gentian, and fox grape (native to Ohio and precursor to the modern grape)—altogether a wide variety of flowers and trees, many of which are on the special concerns list because they are quickly disappearing in Ohio.
From Carlisle Reservation webpage

The AllTrails website has descriptions with maps of hikes on the trails in the Carlisle Reservation. 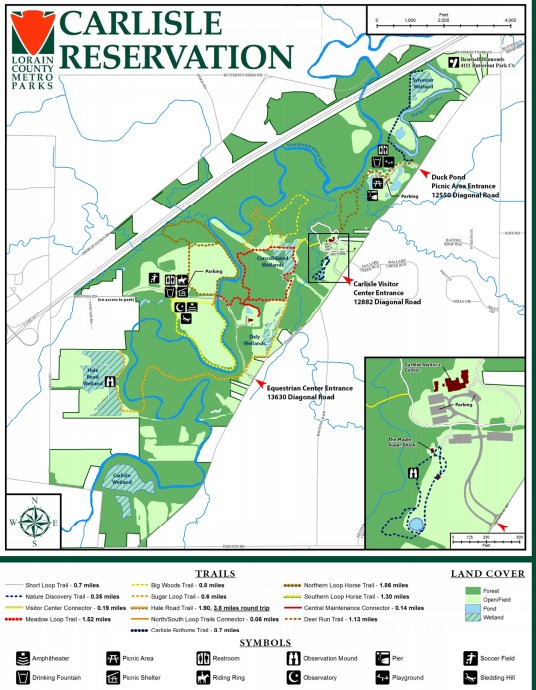