The Portage Lakes are a group of reservoirs in Northeast Ohio. The name comes from an old Indian portage path that connected the Cuyahoga River flowing north to Lake Erie and the Tuscarawas River, a tributary of the Muskingum River, that flows south to the Ohio River. This proved advantageous for the Indians and early settlers as navigation from Lake Erie to the Ohio River was possible with only an 8 miles portage overland. Portage Lakes State Park lies at one of the highest points of the state and on a major watershed divide in Ohio. Some water from the lakes reaches Lake Erie and some flows to the Ohio River.

In 1825 the Ohio Legislature appropriated funds for the construction of a large network of canals and reservoirs to supply water for the canal system. The Portage Lakes, a series of lakes south of Akron, were created as part of this network of water supply reservoirs. They were formed by the construction of dikes and dams to raise the water levels of some of the swamps and small lakes typical of this heavily glaciated southern part of Summit County.

Restrooms are at some locations within the Portage Lakes, and there are gas stations and restaurants nearby. 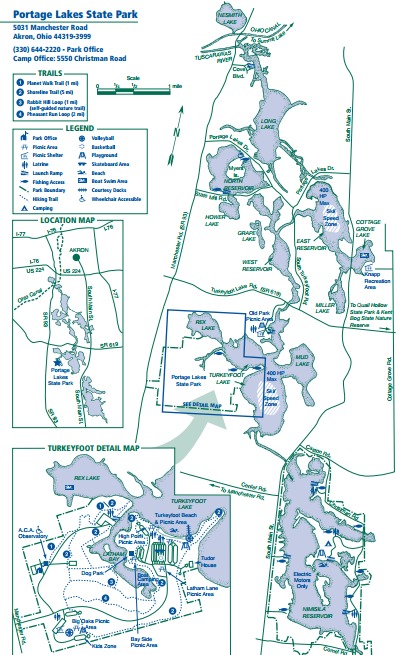