The 9,021-acre Mosquito Creek Wildlife Area is situated in northeast Ohio, 15 miles north of Warren at the north end and to the west of Mosquito Creek Reservoir. It can be reached from OH-87 on the north, OH-88 on the south, OH-45 on the west, and OH-46 on the east. Area lands are extremely flat and poorly drained. Extremes in land relief on the entire area vary less than 40 feet. Nearly 50 percent of the wildlife area consists of second-growth hardwoods. The timber is mainly pin oak and silver maple, with lesser numbers of swamp white oak, sycamore, ash, aspen, beech, and other maples. The remainder of the area is cropped intensively with cereal grains and meadows for nesting and migrant waterfowl. The major water areas include Mosquito Creek Reservoir, 830 acres of marsh, and two ponds of 20 and 32 acres.

The Mosquito Creek Reservoir Project was authorized in 1938 to provide flood control and a water supply for industry downstream. Full operation by the U.S. Army Corps of Engineers was initiated in 1944. The state of Ohio, Division of Wildlife, was granted a license by the Secretary of the Army in 1946 for fish and wildlife management on the 5,370 acres of land and water north of OH-88. The federal land was used as a public hunting area from 1946 to 1962. The state of Ohio established a land acquisition unit adjacent to the federal land in 1956; to date, 6,507 acres have been purchased. The captive goose flock was initiated in 1956 with six breeding pairs of geese. The first successful hatch occurred in 1958. All geese produced since 1961 have been released as free flyers; today the captive goose flock has become a growing resident flock. With the establishment of the goose flock, a game refuge was created at the north end of the reservoir in 1956. The refuge was expanded in 1962 to include all federal lands west of Trumbull County Road 203. As land was acquired by the state it was included in the refuge. Controlled waterfowl hunting was initiated in 1969 and today provides valuable hunting recreation both in the area and in the surrounding countryside. In 1994, a 1,500-acre tract of land was opened for public hunting. In 2001, a 496-acre tract was purchased along OH-45 and will be open to public hunting.

The primary purposes of the Mosquito Creek Wildlife Area are to provide a regional nesting flock of Canada geese, a resting place for migratory waterfowl, a quality public hunting opportunity, and to create an opportunity for bird watchers and others to observe large numbers of waterfowl and numerous other varieties of birds associated with wetlands. Intensive farming is practiced in the area to provide food and cover for wildlife. Extensive land changes were required before grain and meadow crops could be grown. These included clearing, surface drainage, liming, and fertilization. Numerous wood duck and goose nesting structures have been placed in the area to increase waterfowl nesting success and production. A resident population of nearly 1,000 Canada Geese uses the area each year. Peak fall populations of local and migrant Canada Geese have reached 13,000 birds. Small flocks of migrant Blue and Snow Geese often stop over in the fall. Wood ducks and mallards are the most common ducks, followed by teal, scaup, and black ducks. The peak population recorded since 1956 was 10,000 birds. Up to 2,000 Coots have been present at one time during migration. Each spring, an estimated 300 Tundra Swans use the wildlife area and vicinity for about six weeks. Smaller numbers stop for shorter periods each autumn. Woodcock, Ruffed Grouse, and Ring-necked Pheasant are the upland game birds present in the area.

A great variety of both nesting and migrant birds utilize the area. Of particular interest is the spring migration of shorebirds and warblers and the fall migration of hawks. Red-tailed and marsh hawks and kestrels are common summer sights over the cleared meadows and woodlots. Among the rare and unusual birds which have been observed are the African cattle egret, bald and golden eagles, white pelican, glossy ibis, king rail, goshawk, osprey, and long-eared owl. Observation of these birds is an excellent source of recreation and enjoyment for visitors. One of Ohio’s rarer species of reptiles, the eastern massasauga rattlesnake, also occurs in the area. Another rare animal, which may be seen in the area is the river otter. 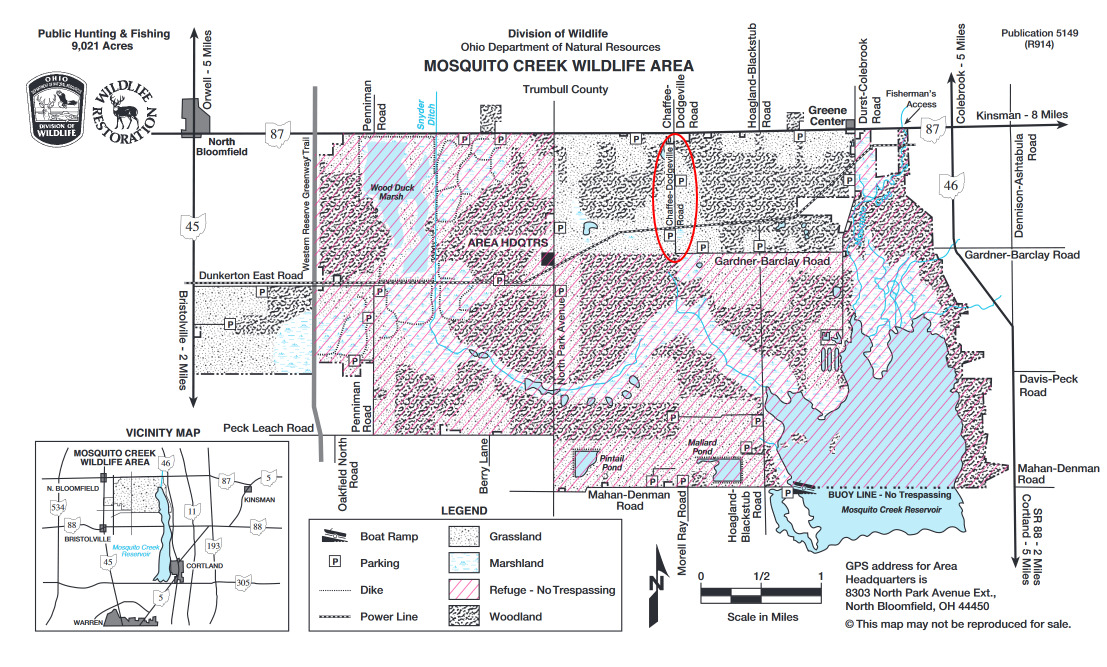 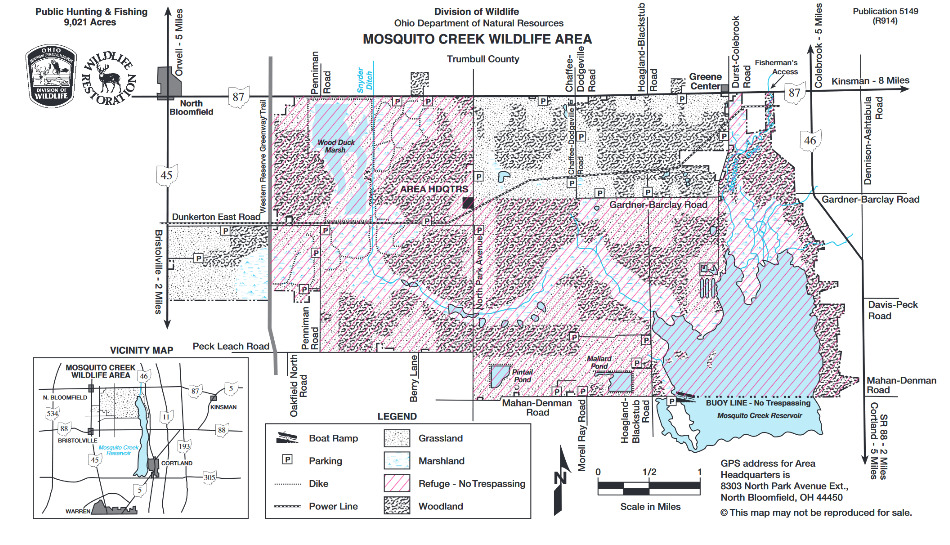